Here's some fun photos I took while visiting Michael and family in Maryland. One day Jessica, Kara and I got some subs from Subway and went to a park to eat. After lunch, Kara rolled down the hill while Jessica and I took pictures! That was some tangled hair after she was through!
Credits: Cool Daze Bundle by Aria 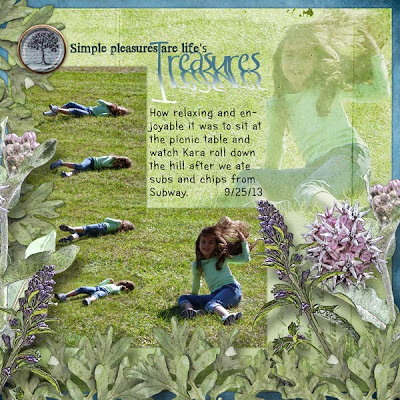 I had this wonderful photo of Ryan that I wanted to do something with, so I googled "life upside down" and who would know that I would find a poem with the exact title that worked exactly with my page! So, the link led me to a Christian lady on Hub Pages, user name of lambservant, Lori Colbo. She is a grandma and wrote this poem for her grandson. I asked her for permission to use the poem on my page and let her know I would be posting it in different places on the web. She asked her son and DIL if it would be OK then Lori gave me the OK this morning! Check out her Hub Page here: http://lambservant.hubpages.com/
Now for the other credits:
"Life Recorder" kit by b.j. designs at Aimee Asher Crafting in the Boutique here: http://www.aimeeasher.com/shoppe/product.php?productid=6548&cat=0&page=1
Font is Candara 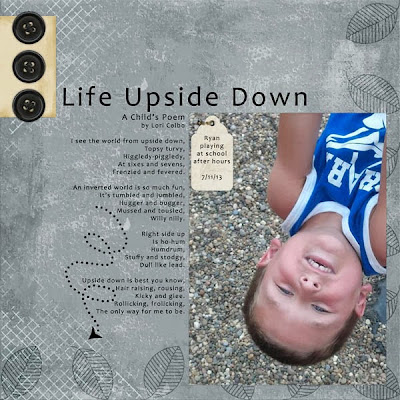 It's been awhile since I posted any pictures of activities going on around here, so I thought I would do that for this post.  I'm sure you have been enjoying the scrapbook pages I have been creating, right?  I didn't have time to do any of that over the summer, so I'm working like crazy to get some done!  :D

Anyway, here's some photos taken recently (within the last week to two weeks, anyway).  I'll give a little explanation after each one for you. 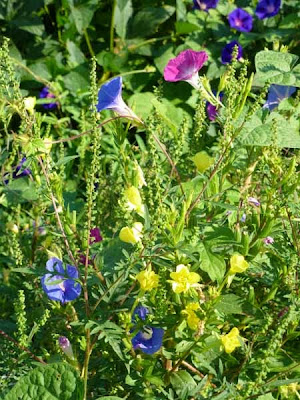 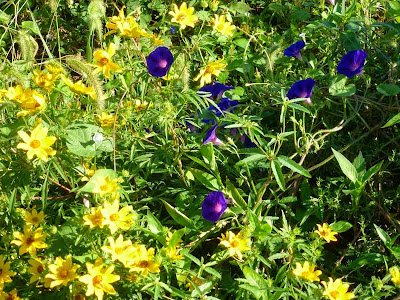 These first 2 pictures are of the wild flowers that grow along the edge of the church property and the field right next to us.  I just love the colors of the morning glories, the daisies and the other little yellow flower from the top photo. 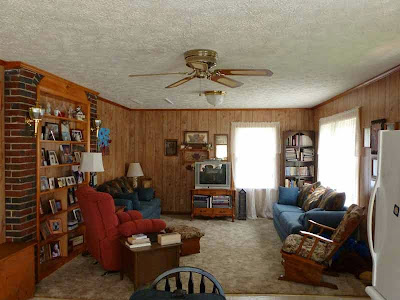 I've been doing some clearing out and rearranging (not this week, but a couple of weeks ago, I guess).  So, while I was at it and doing the vacuuming and sorting and filing photos into books, I decided to rearrange the living room.  I like it alot better, don't you (those of you who know how it used to be)? 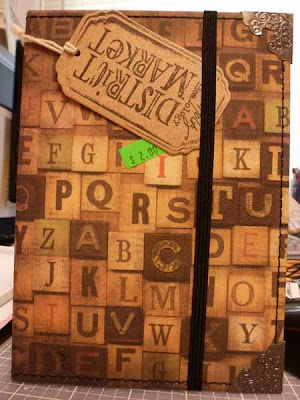 I haven't said too much about my goodies I have found at the thrifts, either.  Here is one example of a really good deal I have found.  This is a Tim Holtz journal that has been discontinued by his store, but a few stores still have them in stock.  You see that little green $2.00 tag there in the middle of the book?  Well, if you were to buy one on line it would cost you $14.99 plus shipping!  WOOHOO!!  CHA-CHING!  :D 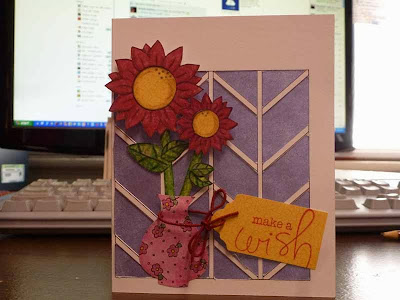 I wanted to do something different with sending out birthday cards to our church members this year.  So, I have been making them.  Here is one I am getting ready to send out.  It is probably the prettiest one I have sent all year.  And, it was a ROYAL pain to do, too!  :D 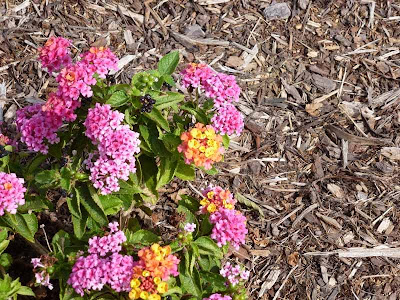 Here's some pretty little flowers growing at one of the Goodwill's we go to every week.  I think it is strange that some of the flowers on this plant were orange.  But they were very pretty! 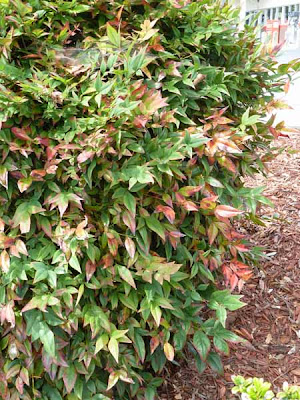 Today while we were out, I noticed some of the leaves on a few trees and shrubs were changing colors!  WOOHOO!  So happy Fall is around the corner!  :D 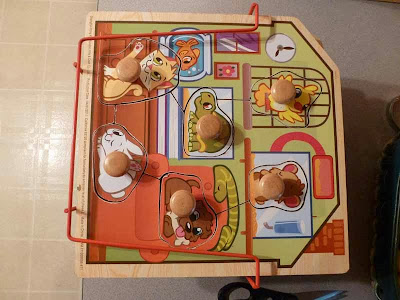 Here's another bargain we found today.  I got these for Jessica's boys because they love working these kinds of puzzles.  There are 6 different puzzles in this set that came with a wire rack for storing the puzzles in.  These puzzles are 1/2" thick and have heavy duty knobs on them.  Paid $6 for them.  I bought a few puzzles like this (not as thick) at AC Moore one time when the kids were here.  I had to pay $3 for each of them and they were not nearly as nice as these are! 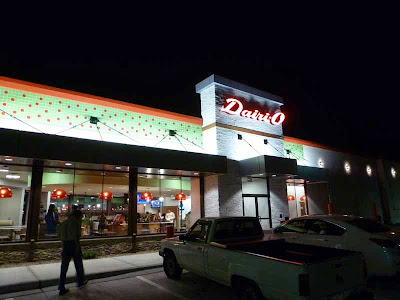 A couple of months ago Tim and I went to DQ for some ice cream, except that when we got to the location, DQ had left the building!  We have no idea where they went!  However, this is a new "DQ" of sorts.  One of the couples at church took Tim and I there for a meal after church last Sunday.  They also serve hot dogs, hamburgers, BBQ's, fries and such.  I got the BBQ, which was really good. 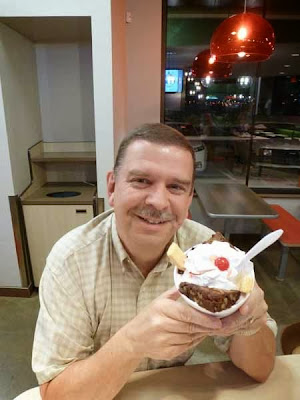 So, tonight Tim wanted to go and get one of their Brownie Sundaes.  It is HUGE!  He said it was delicious!  I got a flurry, which is on the order of DQ's Blizzard.  However, the flurry was realy thick!  I got heath bar candy crunched up in mine.  It was very good! 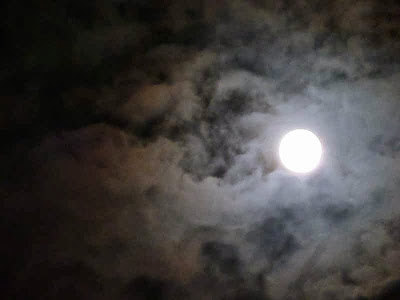 Finally, last but not least, this photo I took of the Harvest Moon tonight.  I had to get the tripod out because I zoomed way in on this and just could not hold the camera still enough in the low light setting for getting a good picture.  This turned out pretty good!  I put the camera on burst action, which gives you lots of pictures with one push of the button in rapid succession.

Hope you enjoyed the photos!
Posted by Vicky at 1:11 AM 2 comments:

Since this is a kit for recording life, I thought it only appropriate to record something about the newest little bundle of life in our family.  Adalina Grace was born on August 7th.  She spent the night with her Aunt Elisabeth, so Auntie is getting some snuggle time in with her. 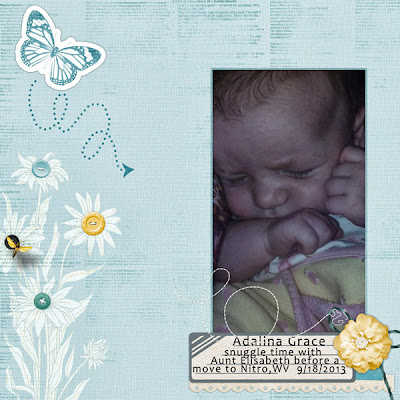 Back to the Pasture

I tried to do a little bit of water coloring on this photo, but I need lots of practice!

I love photos taken from behind (as long as it isn't MY behind in the photo, lol!). Kara's mommy﻿ thought of me when taking this photo!  Thanks, sweetie! 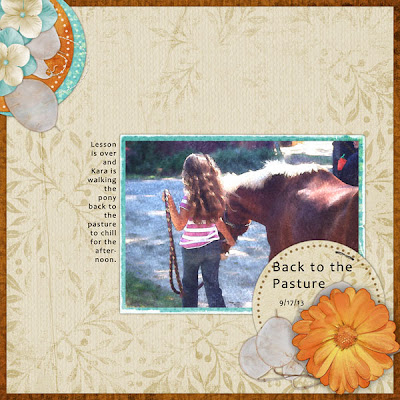 This mini kit has got some really cute she art in it!  With or without faces and even in black and white so you can color to your own liking!
Kara looks like she was day dreaming while riding the horse!
Credits:
Sassy Girls by b.j. designs at Aimee Asher Crafting﻿ found in the Boutique here:  http://www.aimeeasher.com/shoppe/product.php?productid=6560&cat=0&page=1
Font is Candara 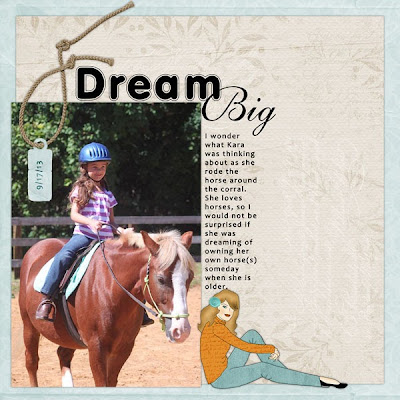 Kara's Back in the Saddle!

I'm catching up on some layout posting!  :D 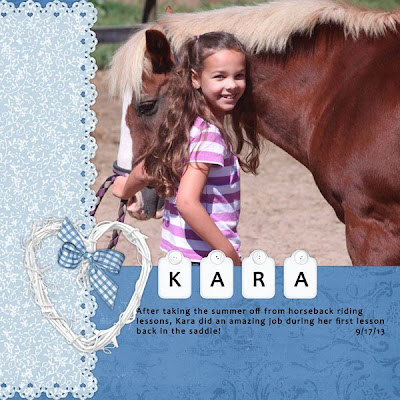 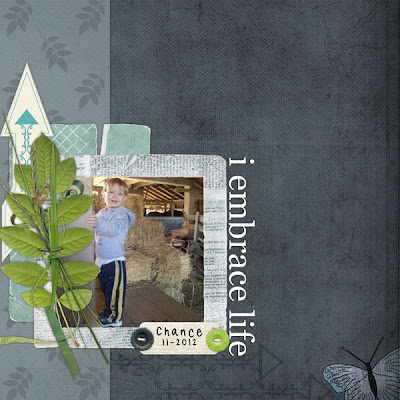 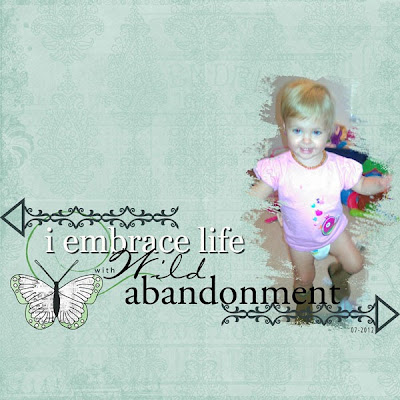 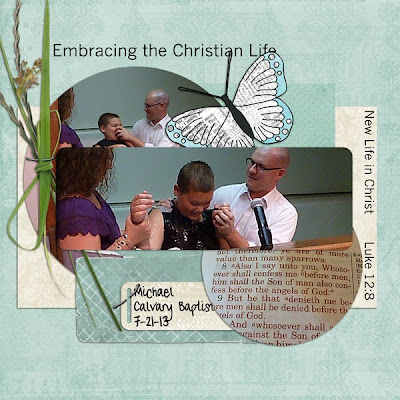 Our Oldest grandchild is a child of the King!

Here's a sweet layout for you to enjoy:

Abigail loves strawberries! This was the perfect kit to use for this photo!  Love the juice dripping off of her little chin!
Credits:
Strawberries and Violets by b.j. designs found at Aimee Asher Boutique here: http://www.aimeeasher.com/shoppe/product.php?productid=6111&cat=0&page=2 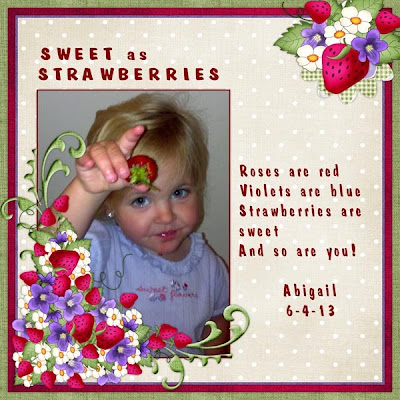