Mondays.......not dreaded like they used to be when I worked at a full-time job.  However, the weeks I have to do grocery shopping, I still get the Monday blues!  I LOVED it when Tim got the groceries on his day off when we lived in Buffalo, WV.  BUT, I love even more not having to go to work!  I told Tim last Thursday that I was thinking about going out and looking for part-time work.  However, I feel sure that will mean missing church on Wednesdays AND possibly even Sundays, which I do not want to do!  My place is beside my husband when he is at church!  He told me there was no need for me to look for work since I don't have to.  We are doing fine.  The Lord is taking good care of us!  We aren't getting rich quickly, not even slowly!  :D  But, money isn't everything!

Anyway, after getting the groceries, I took care of the church sign.  That is another Monday job, however, sometimes I do it on Sunday.  This is an every week change, unless we happen to be out of town.  One of Tim's (and mine) pet peeves is seeing a church sign that is quite obviously out-of-date, as in announcing an Easter program and now it is June!

The sun was already hot at 11:00 when I started working on the sign!  The days have been gorgeous lately!  And the temps have been wonderful, too!  We were supposed to be 10 degrees cooler today than what we had yesterday, but it felt like it was going to get hotter while I was working on the sign!  Here's the last sign and today's sign.  They are very applicable for today, and even in the voting area!  Couldn't get the pictures to upload, so here's what last weeks sign said:  "Trying times are no time to quit trying."  This week's says:  "Sow today what you want to reap tomorrow."

Well, after I got the sign done and ate I worked on my computer the rest of the day, trying to find drivers, etc for my printer and scanner so I could use them with the laptop Michael gave to me.  No such luck, unfortunately.  Eventually, I'll have to get another printer.  But I will be keeping the current printer as long as I have the laptop.  Actually, I'll probably keep it longer because I can still scan stuff and print it right from the printer even without the use of the laptop.  That's how I print out my Sunday school lessons for the kids.

Here's the picture I got done today for Jessica's album. 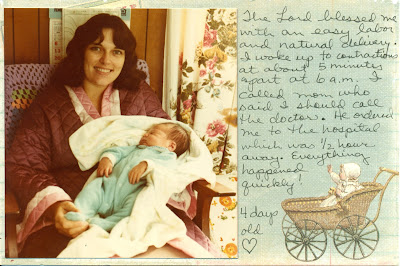 The story will continue tomorrow!  :D

I started a project a couple of months ago that I have gotten back to this past week.  Sorting and organizing family/church photos through the years.  What a job it is!  But, I am finally at a point, somewhat, that I can start putting the sorted photos back in albums in an organized manner.

The dumb part of this story is that a couple of years ago I started buying albums at the thrift so I could get the thousands of photos I have out of boxes and into albums.  I was so intent on getting them out of the boxes that I didn't even think about putting them in order first!  DUH!  Now, I've got the job to do again!  But, this time I will do it correctly!

A lot of the kids pictures that we took have gone to the kids.  However, I got all of mom and dad's pictures, so I have a lot of them again.  I have a lot of theirs, too, that they took with their polaroid and/or camera they had.  Most of them don't have any dates at all, so I am having to rely on my memory, which is iffy at best!  :D

Well, anyway, this weekend I started on Jessica's album.  I am using pre-made scrapbooking items, trimming the pictures down to fit and writing some memory on the card.  There are so many that I will not need to write on each one but here are the first 3 that I have done (I'll type out what I have written on the card so it will be easier to read for some of you): 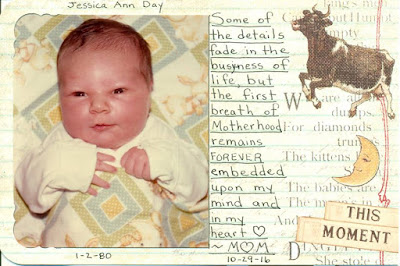 "Some of the details fade in the busy-ness of life, but the first breath of Motherhood remains FOREVER embedded upon my mind and in my heart ~ MOM (aka Vicky Day)"
This is Jessica's hospital picture, obviously!  She was born on January 2, 1980.  She was due December 27, 1979, little stinker!  :D 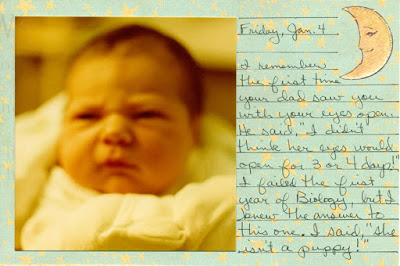 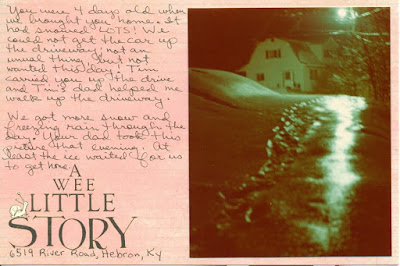 "You were 4 days old when we brought you home.  It had snowed LOTS!  We could not get the car up the driveway; not an unusual thing, but not wanted this day!  Tim carried you up the drive and Tim's dad helped me walk up the driveway.  We got more snow and freezing rain through the day.  Your dad took this picture that evening.  At least the ice waited for us to get home!"


At the beginning of the year I had resolved to take a photo of Tim and I each day.  That was going pretty well until I started with the stomach issues and was sick.  So, I have missed LOTS of days!  I'll post some later that I have taken in the last weeks.
Posted by Vicky at 9:24 PM No comments: