Flowers in my Art Journal

I tried something different with my art journal last night (Monday).  And, it turned out OK.
I laid down a flower stencil on both sides and stenciled with the green.  Next I used the cut-out part of a homemade stencil, laid it down in the center and stenciled the blue around it to get a "window" effect for the flowers.  Then I took a micron pen and drew in the flowers from the first stencil.  Then I painted them.  Next, I used the homemade stencil to outline around the "window" and painted a shadow around it.  Then I printed out the verse on a 4x6 index card, cut it apart, outlined each piece and glued them down.  I sprayed a gold glimmer mist over the whole thing.  That is what showing up as shiny in the photo. 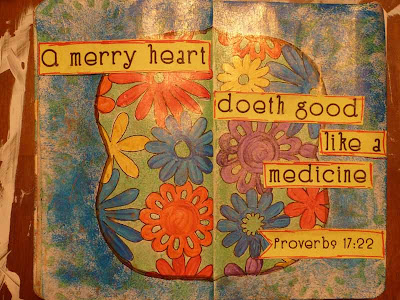 So today (Tuesday) I worked in VBS stuff all day.  I printed and hung schedules in the classrooms and various other parts of the fellowship hall where we hold the VBS.  I put up the neat decorations that Liz made to use for their VBS at Buffalo Baptist.  THANKS, Liz!  I filled up the guessing jars with candy and stuff, one for each day of the week.  I made the mystery box.  I toted the craft stuff from the house back to the storage cabinet in the fellowship hall.  I swept up tons of spider webs and bug carcases from the entry where the name tag table is and in the kitchen area.  I also made several bean bags for the tossing games we use during VBS.  I used some sleeves I cut off of some long-sleeved shirts to make them into short-sleeved shirts.  I filled them with clear pony beads I had on hand.

While I had my broom in hand, I swept off the HUGE spider webs from the entrance at our back door.  What a mess!

I worked on cleaning up my paint mess from the dining room tonight.  I dragged it all back into my craft/computer room.  I'll attempt to put it back in the right spot tomorrow!  :D

Watched "America's Got Talent" tonight with Tim.  That is the only TV that I watch!  If you watch it, the most amazing thing to me are the young kids and the talent they all have!  And those crazy stunt people are just that.....CRAZY!!!!

I like the look of using silhouettes on art journaling pages.  So, today I made some.  I found some pictures on the internet that I could extract from the background, filled them with white, stroked them with black to outline and then printed them on some $store manilla folders.  Then I used an exacto knife to cut them out.  This did 2 things.  One, I can use the cut out as a mask to add a sillhouette to my creations.  Two, I now have a stencil to use on my creations. 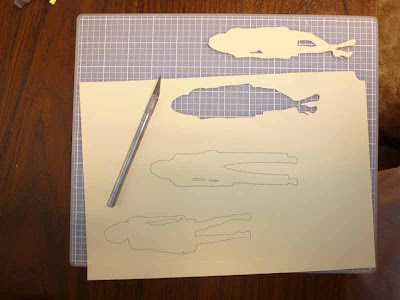 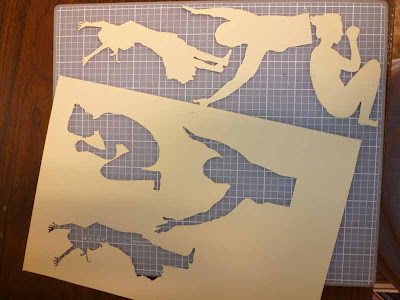 Cutting the figures out was a pain, but I like the results!  :D

Here is an art journal page I did using the bottom stencil. 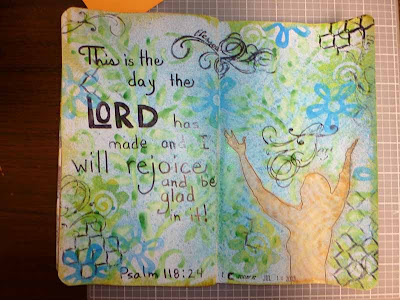 So, I decided that trying to make enough Gelli Plates for the VBS youth project of making a book was not going to be feasible.  I decided instead that we would just use stencils and spray some acrylic paints that I put in little spritzers.

First, I sprayed the paper with water and then with paint. 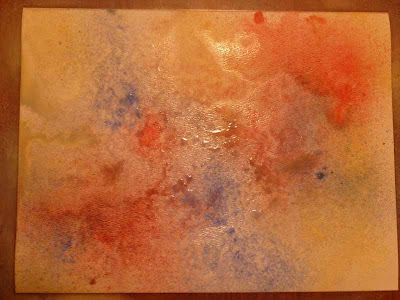 After that dried a bit, I added a stencil and sprayed the green paint.  When I lifted the stencil, the first layer of color showed through in the flowers, which was my goal!  :D  I like it when a plan comes together!  :D 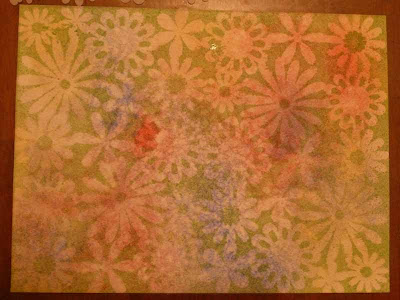 After the paint dried, I used another smaller stencil and stencil brush. 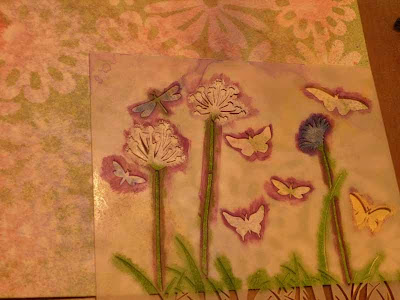 You can't have too many butterflies, right?  :D 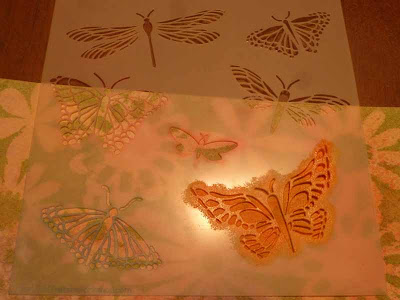 So, here is the front and back cover. 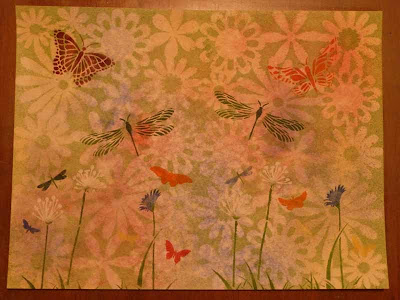 Next, I used the same technique as the front for the inside of the cover except I didn't spray the paper with water first because I forgot!  I actually like this side better because it is not as muted as when using the water because the paint soaked into the paper and remained stronger in color. 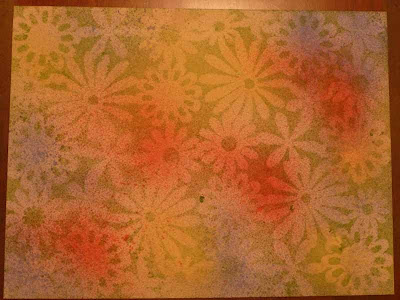 So, here is the cover folded in half.  I outlined the large butterfly and dragonfly with colored pencils to help them stand out a bit against the background. 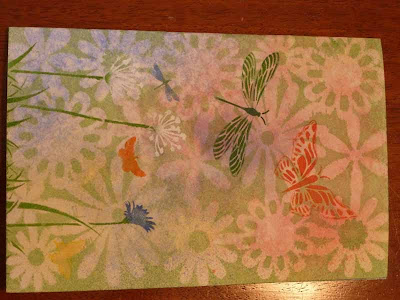 The cover will take a day and to fold, punch, insert and sew the pages in will take another day.

The last project for the youth will be a version of the Witnessing Bracelet, using more beads and threading them together differently than usual. 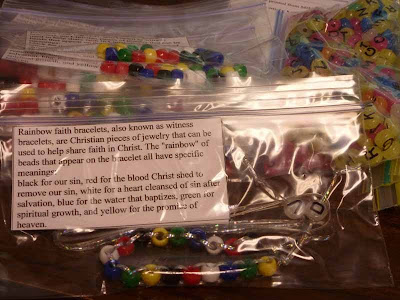 I've been working on VBS stuff so much the last couple of weeks that I decided tonight was time for me to do something for me!  Selfish, I know!  :D

So, I found this journal at the thrift shop sometime last year and just have never done anything with it.  But, recently I ran across some Christian graphics by Emily Burger of Emily Burger Designs.  I was inspired by her work and decided to use her inspiration to put stuff in this journal. 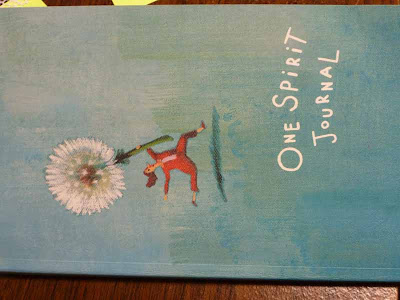 So, here is what I did with the first pages inside.  The quote on the left reads:
"What lies behind us and what lies before us are tiny matters compared to what lies within us."  by Ralph Waldo Emerson.  I used an embossing element as a stamp along the right hand side.  The diamond shapes were made from a stencil I created, printed and then laid a piece of overhead projector transparency over and cut out by hand!  What a royal pain!  But, I sure like the stencil!  I used a piece of paper towel to shield the quote as I sprayed ink onto the page. 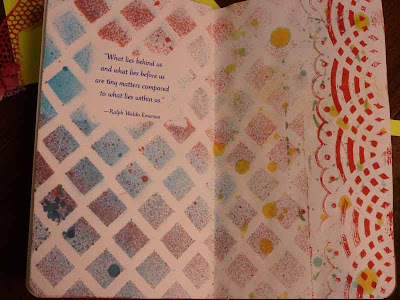 And I love how this turned out!  The circles is from another stencil I created using a circle punch.  But I couldn't do a whole sheet because the transparency plastic kept jamming the punch.  The words and the hearts are the inspiration I used from one of Emily's designs.  The word strips were printed onto a 4x6 neon yellow index card.  I cut the words out and then put some red ink around the edges.  I did the same to the edges of these pages.  LOVE it! 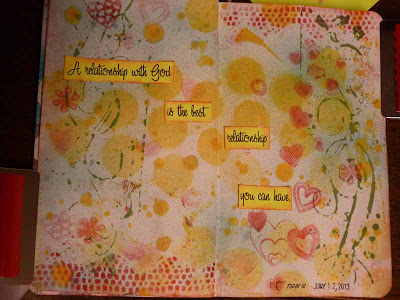