Today was a long day, for some reason.

Woke up with a headache that hung on all day.  I've been blowing my nose a lot.  I hope I'm not getting a cold!

Today was laundry day.  Plus cleaning the church.  Plus I worked on one of the plants in the church that was really scraggly and dying.  I cut off the best shoots, dug up the huge root ball and threw it in the trash.  Put a couple of the shoots back in the dirt and added potting soil and watered it pretty good.  I brought a bunch of the shoots to the house to put in water, hoping they will take root in case the ones I put in the dirt at church don't make it.

Didn't have to do any more snow shoveling today!  The sun took care of it!  :D

I didn't wait on her answer because I needed to go to the store to get some things for the meeting tonight.  So I picked up some Nyquil and Dayquil Severe Cold and Flu medicine while I was there, just in case.  I also got the refreshments for the meeting.  Tim laid down to rest while I went to the store.

When I got back Tim was still in bed, so I got the Fellowship Hall set up for the meeting.  I also shoveled a little bit of snow so that the parking lot would dry in the sun and not leave any wet spots to freeze causing dangerous spots for the ladies to have to walk on.

When I got back in the house I had to do a little bit of sewing (more about that later).  Tim woke up and said he slept pretty well and felt better.

I fixed TV dinners for us for supper.  Haven't had a TV dinner in YEARS!  I bought a couple of Hungry Man Fried Chicken dinners while at the store today.  Next time I'll just go to KFC.  Don't know why I didn't think of that in the first place.  The chicken in the TV dinner was mostly breading!  I used to like the Banquet chicken dinners.  Live and learn!  :D

There was some confusion about the time the meeting started tonight, so if you are reading this and you didn't make it to the meeting, just know that the next meeting is scheduled for Friday, April 10th at 7:30 p.m.

There were 6 ladies, including me.  We discussed a project to do for the Assisted Living residents that we see each month.  We had a devotion, ate and played a game.  We finished with prayer.

When we visit the Mallard Ridge Assisted Living facility every month, the ladies always comment how nice and warm my hands are when we shake their hands.  So when I saw these little rice bags as I was browsing the internet one day, I thought they would be the perfect gift for us to make in our ladies' group and take to them. (Click on the picture to get the instructions at Bee In My Bonnet Blog.)  So, I took 2 fat quarters from my stash and quickly cut out 8 bags and stitched them all together, except for one so I could show our ladies how they went together.  But, when I called the activities director, she said it was a good idea, but it was a legal matter and would not be allowed.  They have some of these that only the Physical Therapists are allowed to administer.  Yes, the residents have access to a microwave, but there is the possibility of them getting the bags too hot and burning themselves.  And I have to say that the one I heated up for 30 seconds was really too hot to hold for a couple of minutes.  But, it held the heat for at least 20-25 minutes!  So, we discussed some other ideas instead.

But, I already had 8 cut out, 7 already sewn together and ready to fill with rice.  So, I decided to create a word game for the ladies and the 4 top scorers would each win a set of the bags.  So I finished filling the ones I had made with rice and sewed them closed, stitched up the one I was saving as an example to show the ladies how to make them, filled it, stitched it closed and had the 4 sets I needed for the game.  So, all was not lost!  The ones shown in the picture are not the ones I made.  I made both sides alike. 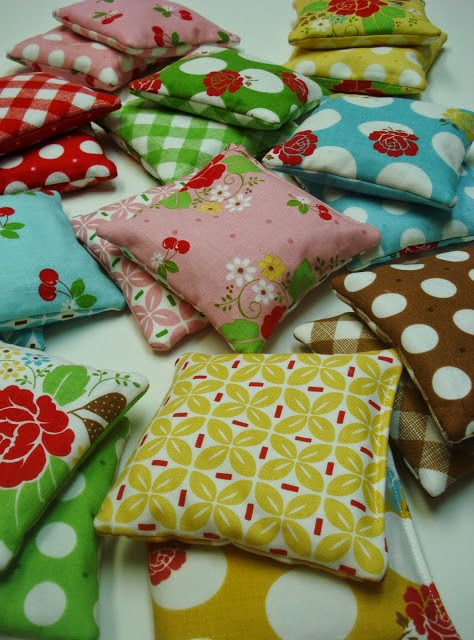 That's it for me tonight!  Have a great weekend!
Posted by Vicky at 10:27 PM No comments:

Well Tim did not want to venture out onto the roads today to do our regular thrifting, so we had a snow day and stayed home.

Last night before bed I looked out the front door again to see how much snow had collected in the past 2 hours.  It was coming down very heavily and collecting quickly!

Tim said we got 4-5" but I think if it had not been so wet and heavy there would have been lots more.  But it really packed down.  These are pictures I took right after Tim went over to the church to work at 8:10 a.m. 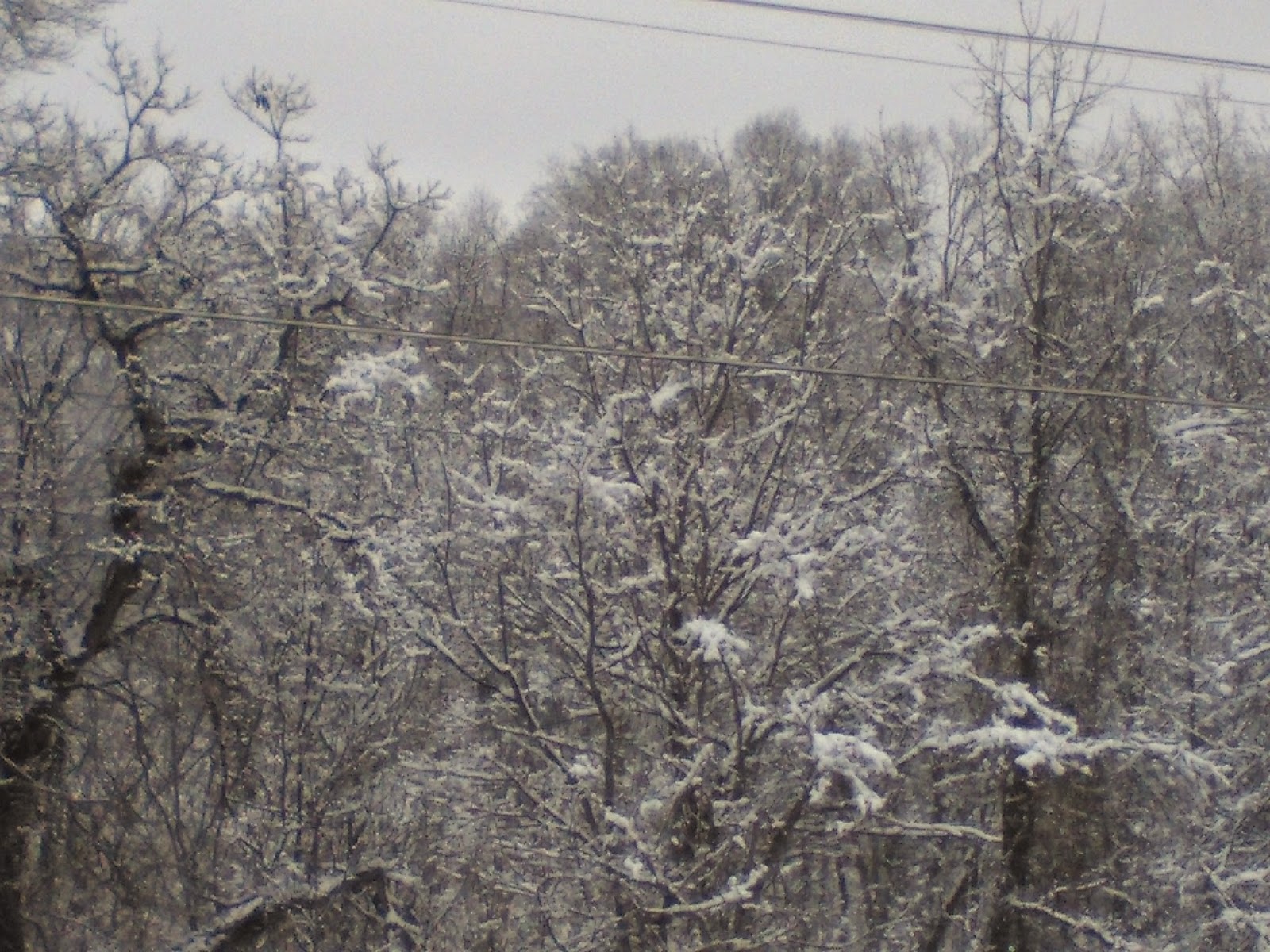 The snow on the driveway and streets was gone by 3:00 this afternoon.  Also the snow that covered the branches was mostly gone. 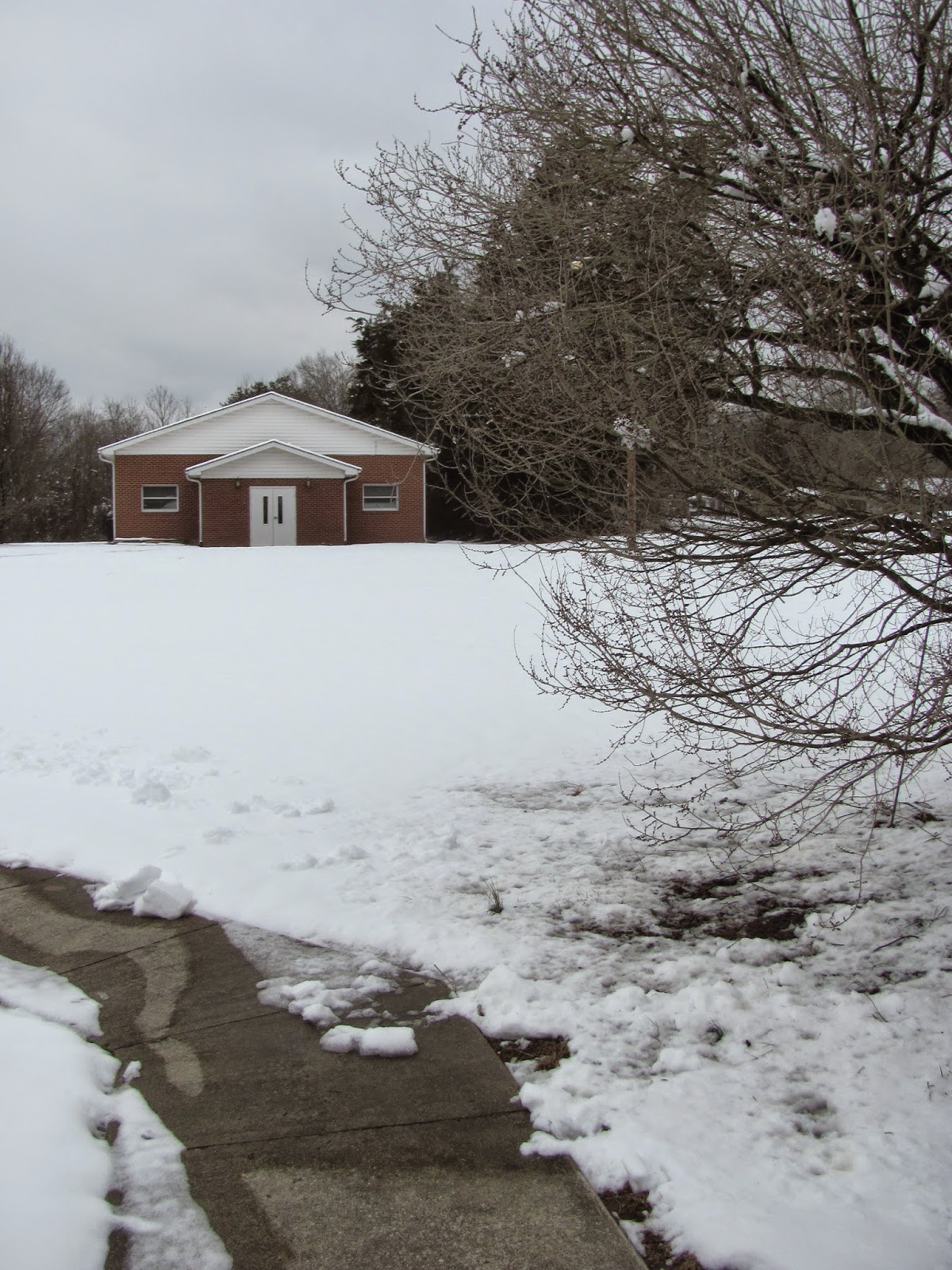 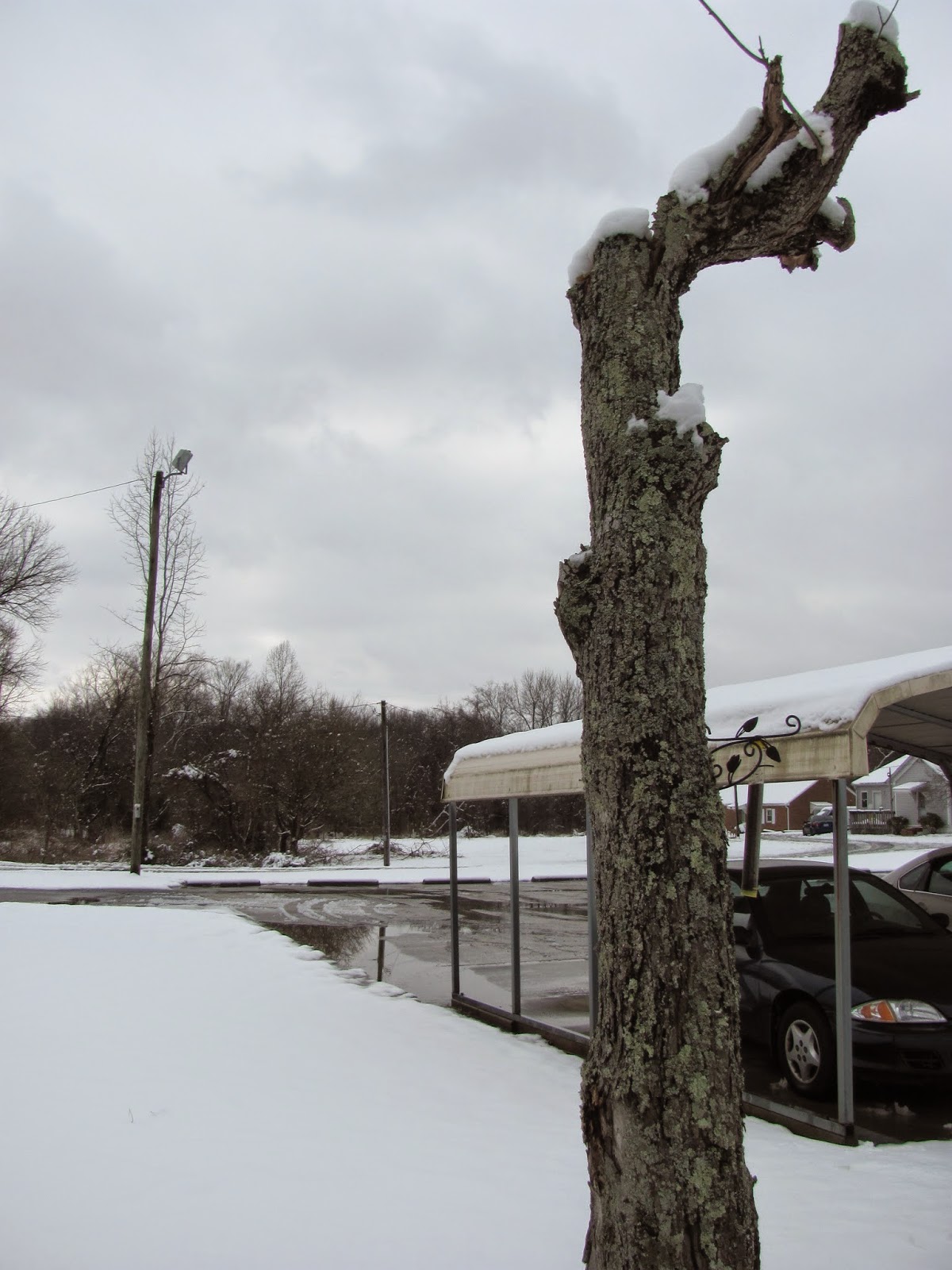 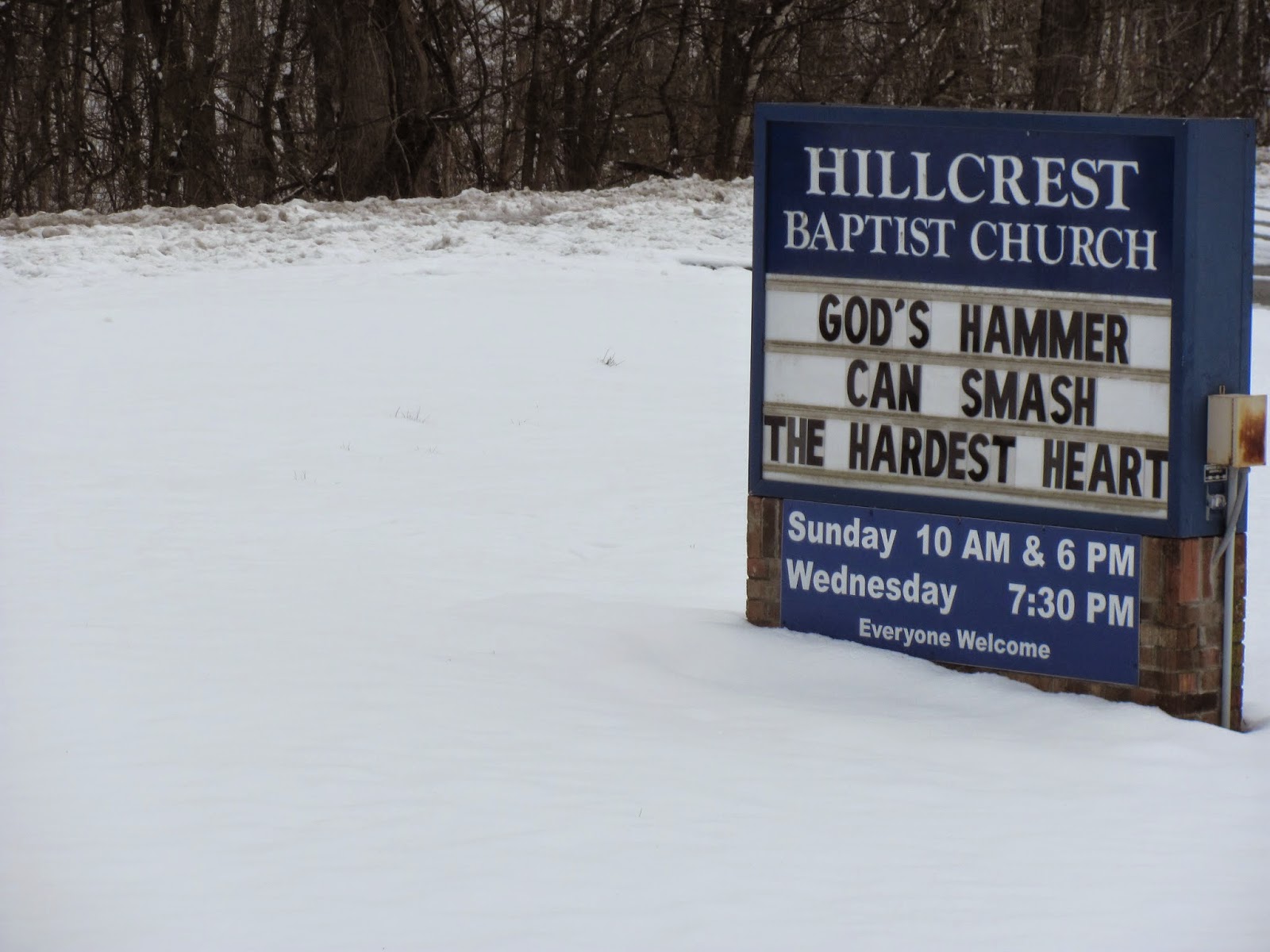 Some of you have been following this on Facebook today, but you will still get something out of it as I have added more photos of the actual procedure.  But, most of the journaling is for those who didn't see the Facebook posts:

Today Tim received the first injections of the genetically modified herpes virus directly into 2 lumps of melanoma that are on the left side of his chest. It is a clinical trial treatment. Praying this is the treatment that the Lord uses to make him cancer free! Thank you ALL for your prayers!

Lots of preparation before Tim actually gets the injections. The doctor had to measure the lumps to determine how much injection each lump would receive. Then the nurse took some blood to run labs on. And she had to order the injections from the pharmacist. It is frozen and will need to thaw for about half an hour. So we went to the food court to eat lunch.

The doctor will topically freeze the skin, insert the needle and "wiggle it around" in the lump to spread the medicine around. There will be a warm feeling, but no real side effects.  2cc's (ml) and 1cc (ml) are the injection amounts. 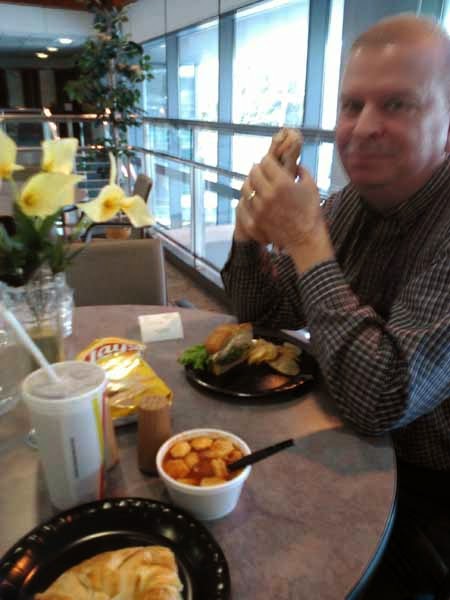 So, the lumps will look bigger before they start shrinking. I asked if they would ever inject the lump under the eye. She said probably not. They have found that it will probably disappear with the lumps that are being injected! 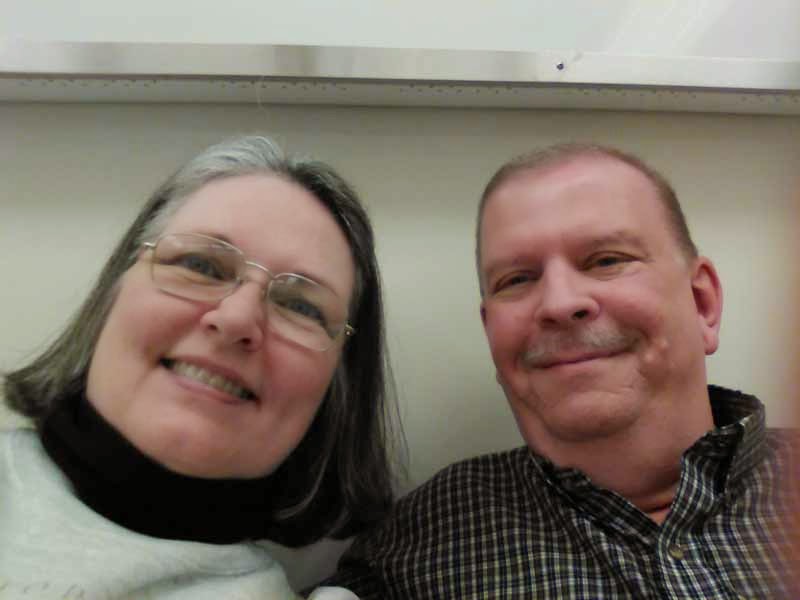 OK, so here's where the procedure actually happened.  Read the captions under each picture for explanations.

They flushed Tim's port while we were there, so everything was finished by 2:00.  The appointment was for 11:00, which means we arrive by 10:45.  Since it took so long, the RN is going to try to schedule the next appointment for 9 a.m.  The next appointment will be 3 weeks from today and then every 2 weeks after that.  For how long, I do not know.  I guess until the lumps are gone!  :D

Here's some information to help you understand, somewhat, the treatment.

The name of the study drug is Talimogene Laherparepvec, TVEC for short. It "contains a weakened form of the Herpes Simplex Virus Type 1 (the "cold sore" virus or "HSV-1").

"TVEC could potentially be spread to family or people who have close physical or intimate contact with the clinical trial participant after tumors are injected with the study drug. So far there have been no reported cases in clinical trial participants who have received TVEC of spreading to family members or other close contacts. So far, no TVEC has been detected outside of the dressing that is placed on top of the site where it was injected."

"Spreading of HSV-1 occurs through direct contact from one person to another, particularly if a cold sore or genital sore is present. The virus is "shed" from active sores and may be present even if the person has no symptoms. It may also be spread by sharing a razor, towel, dish that has come in contact with a sore or bodily fluids. Unlike the naturally occurring virus, however, TVEC is administered into tumor lesions and is not expected to be able to replicate effectively in other noncancerous tissues. There have been no cases of spreading of TVEC to close contacts reported in clinical studies to date."

So, I am not concerned with being "infected" with the herpes virus, as long as the normal precautions are taken. The injection sites are completely covered with a waterproof bandage that is to remain on for 7 days. If it happens to come off we have been given another one to put on right away. So, please don't be afraid to shake Tim's hand at church!

When we left the church, nothing was happening weather-wise.  We were supposed to get rain beginning at 6 p.m. but the weather people said it was so dry that the rain was evaporating before it hit the ground.  But she said that would eventually change.  Well, Tim just looked outside and we don't know when it started, but we now have more snow than what we had yesterday morning!  It is coming down pretty heavily!  Here's a couple of pictures I snapped.

OK, that's it for me tonight!  The snow may delay our thrifting tomorrow!  We also want to go and see the movie, McFarland USA.

Tonight I want to share some of the pictures I could not share from the last couple of days from our vacation.  I will make some notes under each picture to let you know more about them.

These first pictures were taken on Saturday, Feb. 21st when we went to Pam and Jesse's for lunch.  She cooked a huge meal.....mashed potatoes, grilled BBQ chicken, baked beans, deviled eggs and peach cobbler for desert!  After that, we hung around til around 4 p.m.

These next pictures were taken on Sunday, Feb. 22nd.


After the services, we left for home.  We traveled til about 10:45 and stopped for the night in Georgia.  We got up and ate breakfast, packed the car, went to the gas station to fill up the tank and were on the road again by about 9:20.  We stopped for lunch at Zaxby's and got home around 2:30.  Unloaded the rental car and took it back to Enterprise.

Woke up to some white stuff this morning. 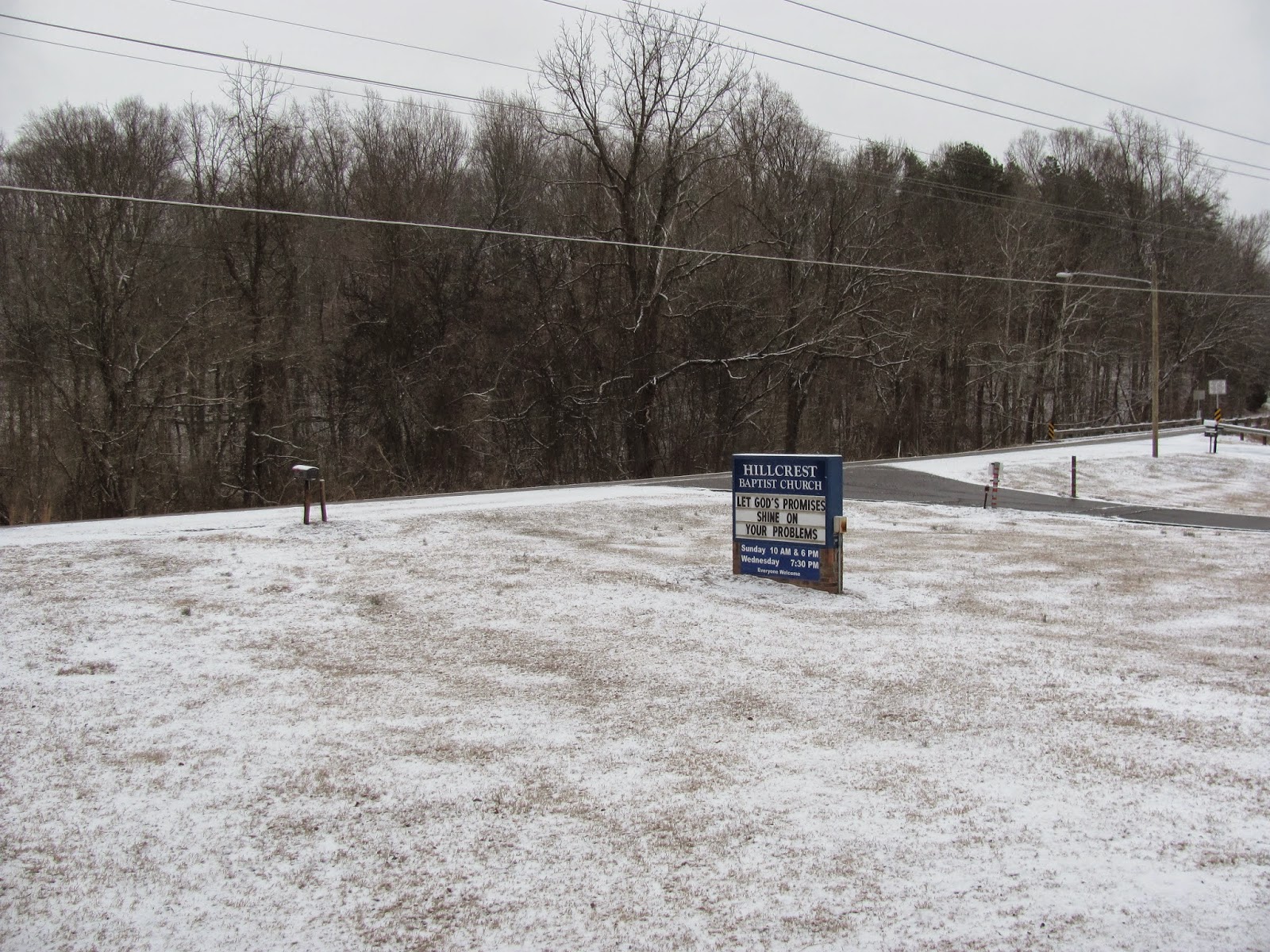 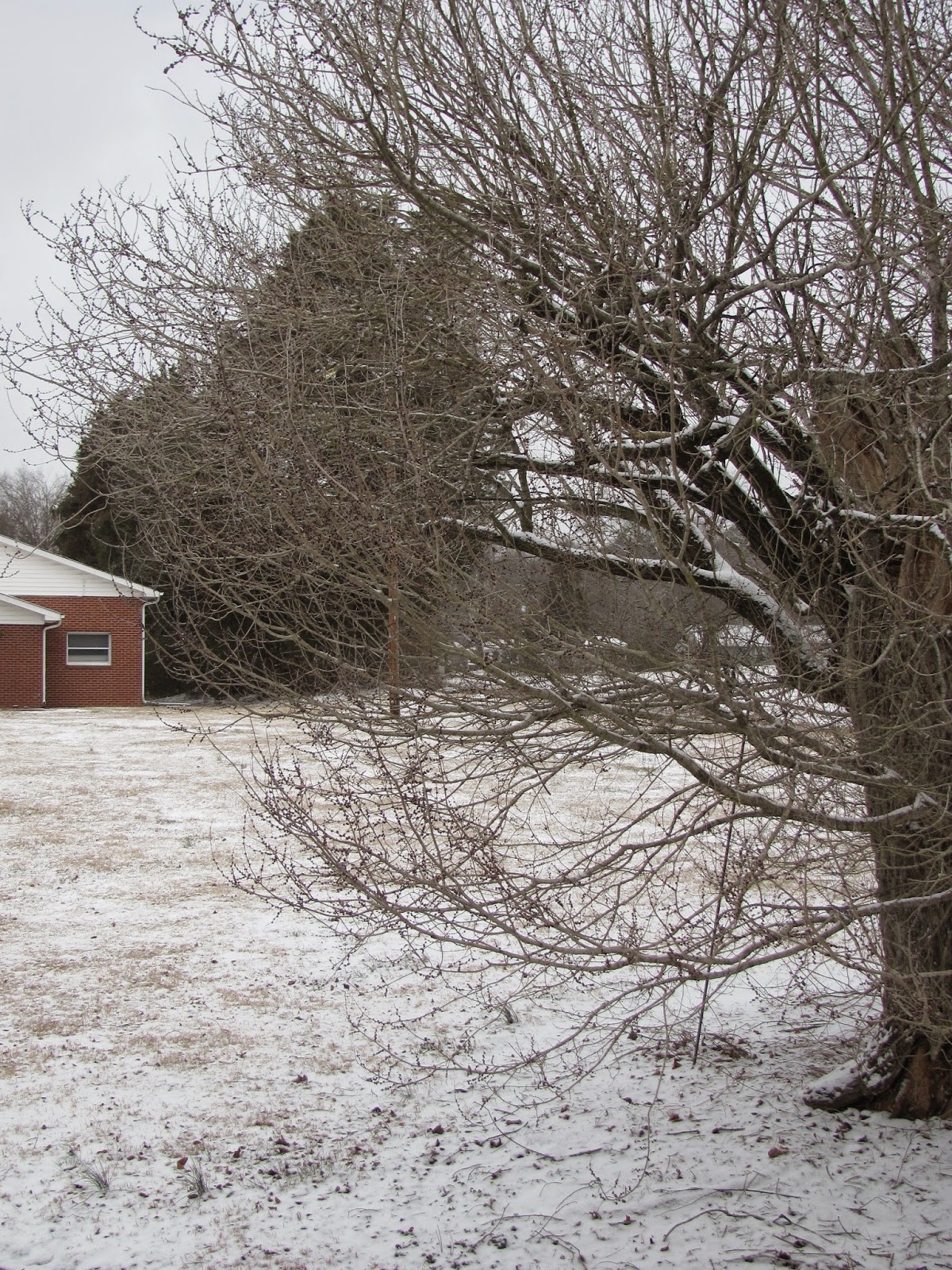 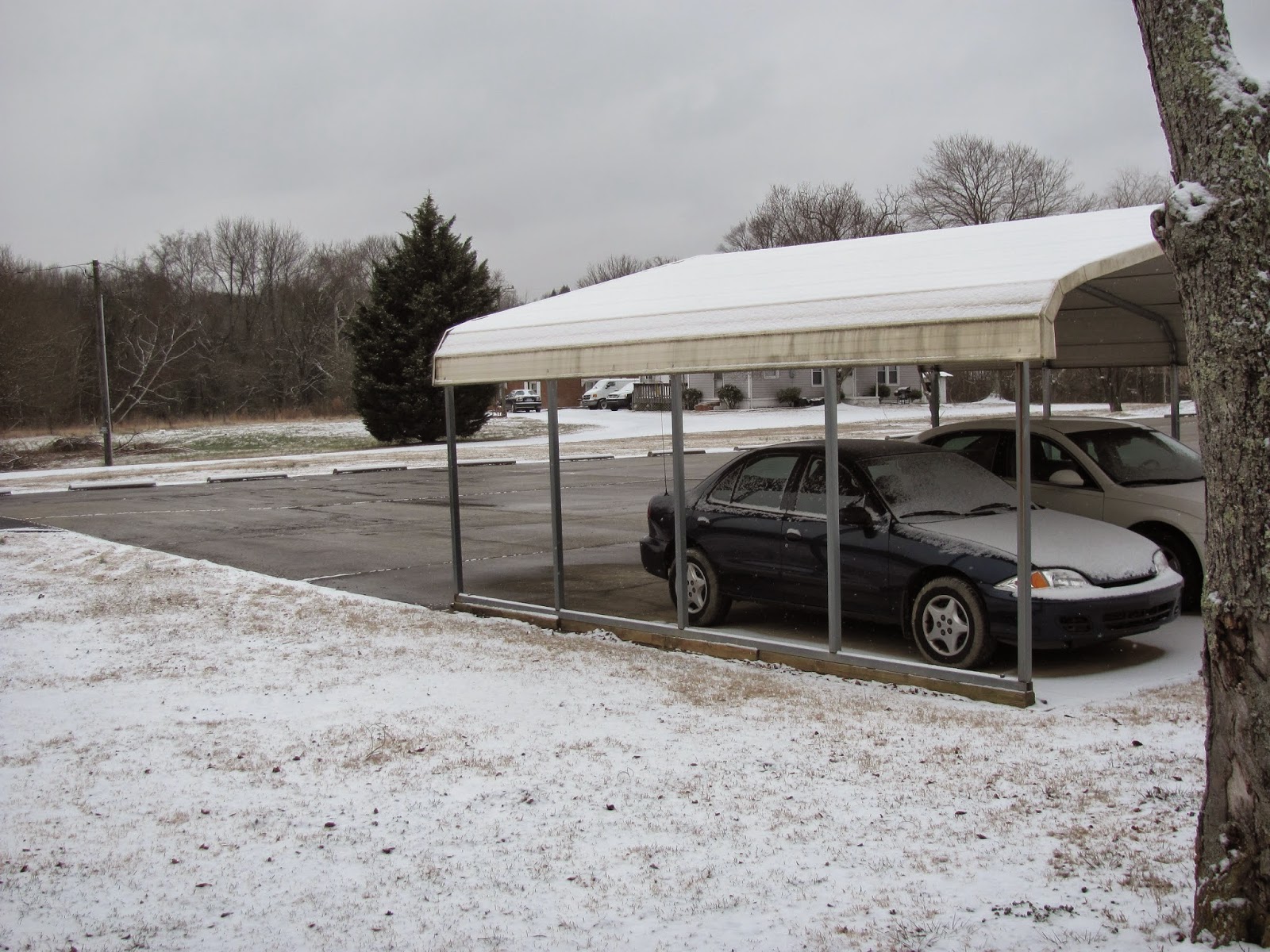 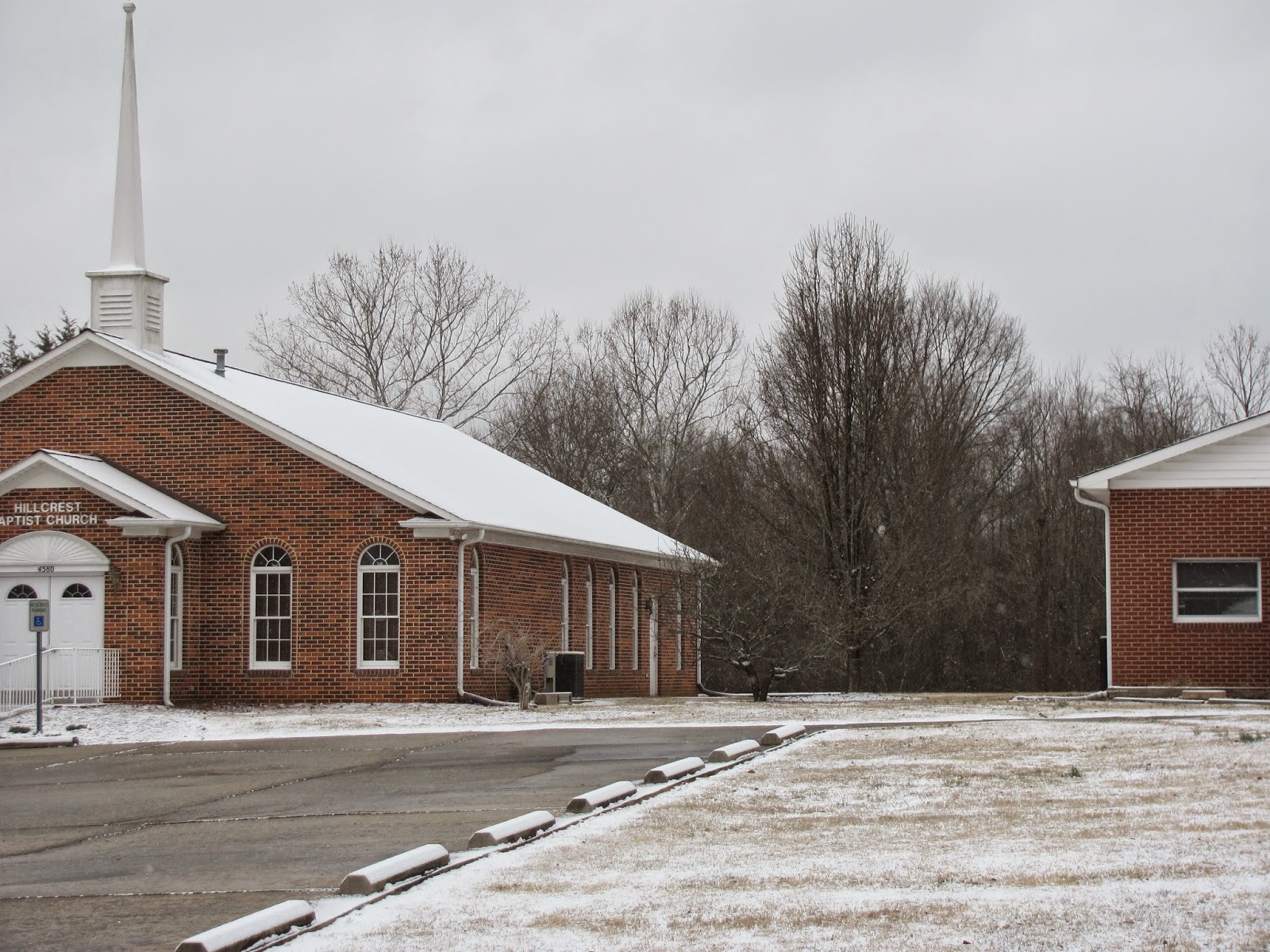 Hoping I don't have to dress like this again!  Come on, SPRING!!