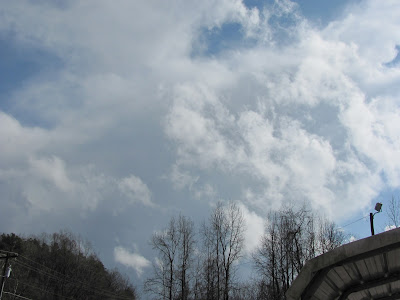 And, there is a picture review of our week.  I've had one of those headaches all day today, so I'm off to bed early tonight!  Nite!
Posted by Vicky at 7:41 PM No comments:

That was a FAST week!  Time just keeps right on zipping by!  My parents used to tell us that time passed more and more quickly the older you get!  I'm believing it!

Thursday, February18th
We tried a new place out for breakfast, Stratford Station, because we were going to a used bookstore in that area to see if we could trade in some/all of the books we have been reading for store credit.  Well, they took very few of them, but for the 18 they kept, they gave us store credit of $19.25!  Now, granted their prices are higher than the thrift store books, but it is better than giving the books back to Goodwill for them to sell again and get nothing for them!  So, it is a win-win!  While we were there, Tim found 3 books he had on his list.  But, then we turned around and found 2 of those at the thrift stores that day!  Doesn't it figure!  :D

Since we were getting a later start than usual after eating breakfast out and going to the used bookstore, we decided to stay in our area and do our thrifting.  So, we went to the usual 2 and then went to the big Goodwill downtown because they have a HUGE book section.  We also hit 2 other thrifts that we rarely ever go to over there.....Mega Thrift and the Habitat ReStore.  I think we found books at the last 2, but not in the Goodwill! 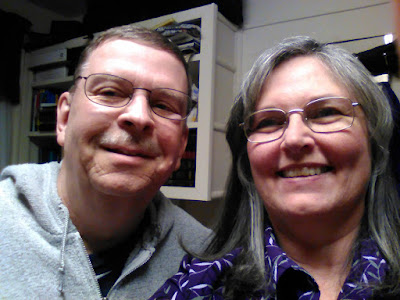 Here's our daily photo.  Tim's comment was, "looks the same as all the rest."  Except that I took it in my craft room.  Guess I'll have to think of some things to get creative with our daily photo!  :D  Except for the suggestions his mom has made, like me on his shoulders, etc!  :D

Friday, February 19th
I have 2 Christmas Cactus plants that are crazy full of buds and blooms!  But, if I remember correctly, I may have had one bloom at Christmastime!  :D

We went to visit the husband of one of our church ladies.  He had a stroke on both sides of his head and is in rehab.  We also went to see Gary Mabe who is about the same.  Saw one lonely daffodil bloom at his house.
Tonight's ladies meeting was Movie Night.  We watched "Ruth."  Hannah even likes it!  :D

Saturday, February 20th
The usual happened today.....cleaning the bathrooms, laundry, cleaning the church.  It was a beautiful day!  I don't know what the exact temperature was, but it was shirt-sleeve weather, especially this afternoon when the sun finally broke through the clouds.

About the only thing done outside of the norm is that we went to visit Buford since he has not been able to get out to church much lately due to the very cold temperatures or bad weather.  He looked better than the last time we visited him.  He told us he has put back on a little weight that he lost due to lack of appetite.  That is good!  He is taking an antibiotic to keep the crud cleared out of his lungs, too.  :D


OK, the rest of these are layouts that I have done, either for the Faithbooking group I am in, or for the monthly challenges at The DigiChick.  Most of these are made using a brand new digital collection by Kimeric Kreations, "Be Still," and can be found in The DigiChick shop HERE.

Well, time to do some reading before bed.  We are going to breakfast tomorrow which means I will be getting up earlier than usual!  :D  Nite!
Posted by Vicky at 11:20 PM 2 comments:

Last night it rained pretty heavily during the night.  But, the temperature warmed and got rid of all of the snow.  We had one little pile in the shade by the car port, but I think that was it!

Tim and I made another run to Walmart today.  He needed cereal, bananas and juice.  I needed some tylenol pm's and stuffing mix for our turkey dinner tonight.  And we made the deposit while there and ordered more checks.  If they order them for us, they are free.  If I order them, I get charged for it.  And we have a free checking account, including checks and deposit slips, so I take advantage of it.  The checks aren't fancy, but who needs fancy checks, really?  Not this girl!  :D  To quote my dad, "If it's free, it's for me!"  :D


I think I shall do some reading tonight!  Nite!
Posted by Vicky at 10:33 PM No comments:

Is it Spring yet?

Man alive!  I am tired of these COLD temperatures!  Wouldn't it be nice to live somewhere that has temperatures around 70 degrees ALL year long?  Is there even such a place?  I don't know!  Oh well!  At least we don't live up north!  Thank You, Lord!

OK, now that I got that out of the way, I'll update you on what we've been up to since Friday.

Laundry, cleaning bathrooms, dusting the man cave in the morning.  Since we were supposed to possibly be getting some bad weather later on in the weekend, I decided to go for some major groceries at Aldi's and a few things at Walmart.  That took a couple of hours.

I usually do not let the canned goods get down as low as I did this time, but I was trying to be sure I was using old stock to replenish with fresher, newer stock.  I also loaded up on meats and a few fresh veggies and a few other things.

Got the groceries put away and then I had to finish my laundry that I started when I got up.  I threw a load into the dryer and another into the washer.  While that was working, I went to the church to do the cleaning.  Came back just in time to hang up the dryer load and start another load in the washer.

We don't buy anything for each other for Valentine's Day.  We would rather go out to dinner.  We were going to try out someplace different.  Tim googled "best restaurants in Winston Salem" and settled on The Tavern of Old Salem, up Main Street about 10 minutes away.  "Built in 1816 as an annex to the historic 1784 Tavern in Salem, NC.  This family operated restaurant features dishes inspired by the Moravian families living in Salem in the 19th century.  We serve locally farmed food, craft and draft beers, wine, and mixed drinks in an upscale casual environment.  Waitstaff wearing historic Moravian attire serve during the day. Dine by candlelight in small intimate dining rooms for a romantic and memorable evening."

They don't open for dinner until 5:00, so we left the house around 4:30 to be sure and get there early.  However, after we waited for them to open the doors, we found out that all the tables had been reserved and unless we had reservations for the evening, we were not allowed in.  Bummer!  We ended up at P.F. Chang's.

We were not overly impressed.  For the price we paid, we did not get much food.  We both ordered chicken dinners, Tim the sweet and sour chicken and I got the almonds and cashews chicken.  There were hardly any vegetables at all.  And I wanted brown rice and Tim ordered white rice, but when the rice was brought to the table, it was all white.  They had run out of brown rice......really???

I got a nice card and a beautiful hair bow from my Secret Sister for Valentine's Day today. 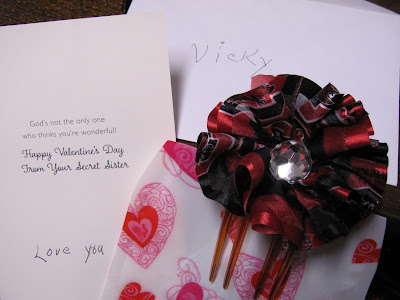 We got word that the Preacher's Fellowship was canceled for tomorrow, and the kids were to be off for President's Day and wanted to spend the night.  So, I met Liz and picked them up. 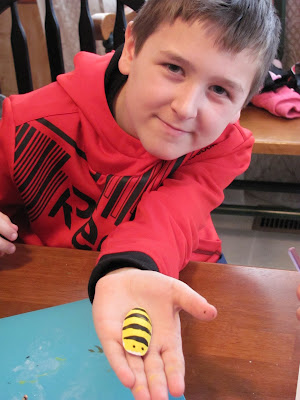 Here's a video of Ryan pushing Abby on the tote lid.

This was taken at McDonald's.  The sound sure echos in the play room!  :D