I woke up at 6 a.m. to Tim's yelling, "Vicky!  Help me!  Vicky!  I need your help!"  Oh man!  That is a terrible way to wake up!  Tim had been in the recliner and had decided to go back to bed.  When he got out of the recliner, the wire to the heating pad was around his foot.  When he got as far as it would go, he went down.  He said he hit his head and he hurt his left shoulder.  He was laying right in front of the doorway to the guest bedroom.  I checked his head.  There was no sign of a bump or anything.  He must have landed on his left shoulder as that was what was hurting him.

Finally after getting him up out of the floor, we made our way back to the bedroom so he could go to bed.  Well, needless to say, I was not going to be going back to sleep!  So, I got him settled and went into my reading chair and read my Bible and my devotional and one other book I am reading.  But the more I read, I started wondering if I should get Tim back up in case he had a concussion or something.  (I did notice this evening that he has a fresh scratch on that left elbow.  But, the shoulder is not really hurting him now.)

Well, at 7:00 he yelled at me from the bedroom.  When I went to check on him, he said, "Maybe we need to call 911."  I think his shoulder was bothering him.  I didn't really think that was necessary, but I said, "Let me call Sharon and talk to her about it."  When I called Sharon, she was on her way to work, but was just coming up to our exit, so she came.  She used a flashlight to check his pupil dilation and had him raise his arm and move it around.  She said if his arm was broken he would have been in terrible pain and would not have been able to move his arm around the way he was able to.  She told me just to watch his pupils for dilation problems the rest of the day.  Thank you, Sharon, for stopping and easing our minds!  I told her, as she was leaving, that I liked having a nurse on staff!  :D

It was such a beautiful morning!  Actually, it was a beautiful day, but the afternoon did get rather warm, but the humidity was still low, so that made it more tolerable.  I asked Tim if he wanted to go outside around 10:30.  I already had my brunch in the oven.  I asked him if he wanted to share it with me, so he did!  But he didn't even eat all of the little bit I gave to him.  I fixed him some ice cream with chocolate syrup on it and you can bet he ate all of that! 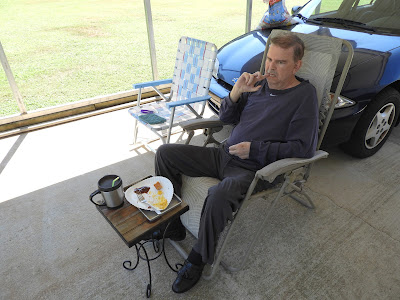 After we went back in the house, Tim laid down to take a nap.  And then I talked him into going to Walmart for a change of pace.  He was going to sit in the car, but I told him I was going to push him in the wheelchair, that he needed a change of scenery.  Well, by the time we got up to the self-checkout, he said, I feel like I'm going to throw up.  So I grabbed a couple of grocery bags and he proceeded to throw up in them.  Some young man came over to help pick up the groceries that fell from Tim's lap when he started puking.  He asked if there was something else he could help me with.  I asked him to go into the bathroom and wet some paper towels for me.  He knew the paper towels were out in there, but he went to McDonald's there in Walmart and got some napkins for me.  Then went to the deli and got a couple of sturdier ones.  That was so nice of the young man!

The puking ended as soon as it began.  I asked him if he thought it was a combination of the double vision and riding in the wheelchair.  He said yes because he felt like it was being car sick.  So, until the double vision is resolved, I guess I won't be doing that any more!  OY VEY!  What a day!

So, today, Tim ate about 1/2 bowl of cereal, 1 chicken strip, about 1/4 cup of mac-n-cheese, 1 ear of corn and some pudding.  He still didn't drink as much as I would like to see him drink!

This evening, we went back out and watched the birds.  I finally got some GREAT pictures of the hummer (the one that guards the feeder)! 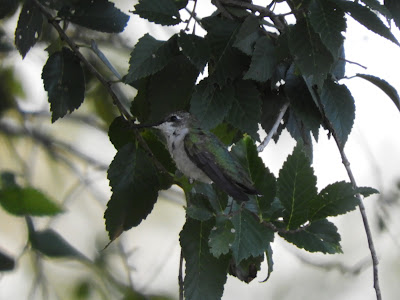 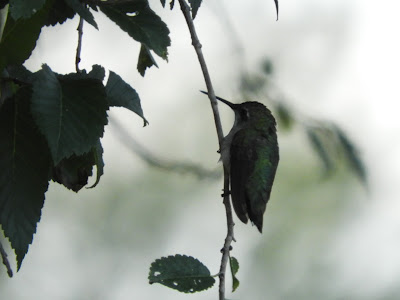 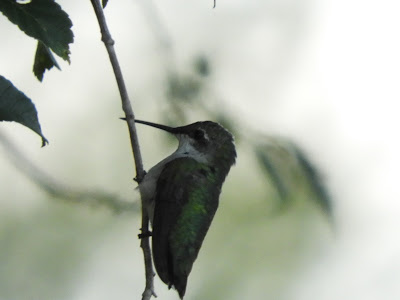 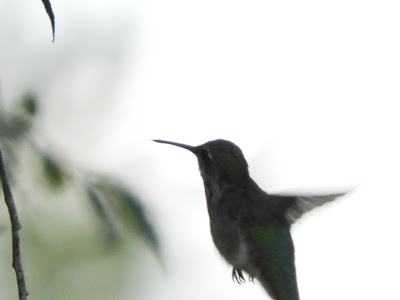 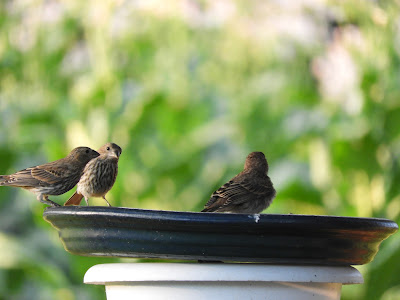 Lead Me to the Rock!

Psalm 61:2, 3
2 From the end of the earth will I cry unto thee, when my heart is overwhelmed: lead me to the rock that is higher than I.  3 For thou hast been a shelter for me, and a strong tower from the enemy.

The enemy.....sickness.  Tim's sickness.  The dreaded "C" word.  Cancer.  I cannot imagine how people cope without having the LORD on their side!  The comfort in knowing that He is in control and is working everything for my good and His glory is the only thing that gives me hope when I am feeling overwhelmed!

Thank you, Joy and Sharon, for singing this song this morning.  It blessed my heart!  I'm so thankful for the ROCK we have to lean on in those overwhelming times!

The Rock That is Higher Than I

O sometimes the shadows are deep,
And rough seems the path to the goal,
And sorrows, sometimes how they sweep
Like tempests down over the soul.

O sometimes how long seems the day,
And sometimes how weary my feet;
But toiling in life’s dusty way,
The Rock’s blessèd shadow, how sweet!

O near to the Rock let me keep
If blessings or sorrows prevail,
Or climbing the mountain way steep,
Or walking the shadowy vale.

Our neighbor, Lori, is moving to Hubert, NC.  Today was her last service to be with us, so she wanted a picture to take with her.  Unfortunately, there are several missing for the picture.


After I worked on the sign after church, we still had a little bit of time before it got dark.  I felt Tim needed a change of scenery from being in the house all day, so we went outside for a bit to watch the birds.  Nothing came around but the cardinals, the hummers and the one bird that I still don't know the name of.  I started getting a bit chilly myself, so at around 8:30 we came back in the house.  Tim was ready for bed anyway. 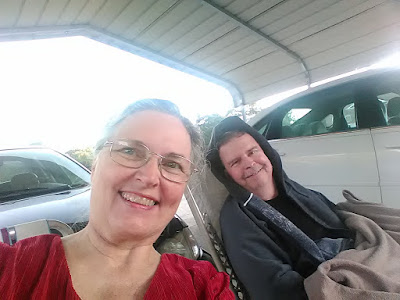 In examining some of the melanoma tumors under his skin, we believe some of them have shrunk.  That is encouraging!  Especially after the rough week Tim has had!  LORD, please heal his body!  Help him to be hungry and, more importantly, to be thirsty!  Thy will be done!
Posted by Vicky at 9:32 PM No comments:

Such a Beautiful Day!

All in all, it was a beautiful day!  A few clouds and a few sprinkles this afternoon, but those didn't hang around for long.  Low humidity and lower temps made for a delightful afternoon and included a wonderful breeze!  My kind of day!

Tim was feeling a bit better today, so I went with the ladies to breakfast at IHOP!  It was so nice and I enjoyed myself immensely!  Calvin stayed with Tim and he said Tim kept the conversation going!  I was gone for 2 hours.

What a fiasco at the restaurant!  We didn't get seated til about 10:30, I am guessing.  The waiter took our 7 orders WITHOUT writing anything down!  I knew that was not a good sign!  Sure enough, after he went to the computer to put the order in, he had to come back to the table and get the orders again.....still not writing anything down!  He got most everything correct.  My egg sandwich had 2 eggs instead of 1.  One of the omelets had no cheese or spinach as ordered.  Pancakes were brought that were not ordered.  One order had each individual item rung up separately instead of as a platter.  The 55+ plates were not rung up that way. The whole table was put on one order.  He had 9 waters on the order and there were only 7 of us at the table and not all of us got water!  OY VEY!!  When we got ready to leave, we just got the shift manager involved and she asked everyone what they ordered and she rang them up separately.  I'd say that waiter was having an OFF day!

Tim took a good nap this afternoon.  I went outside to watch the birds and read so as not to make any noise in the house.

After supper, he watched a little bit of television before joining me outside.  We stayed out another hour or so.  The temperature was delightful to me, but he was a bit chilly in the breeze!  It was time to go in and read our Charles Spurgeon devotions anyway.

Thank You, LORD, for a wonderful day!

Here's some pictures and movies for you to enjoy! 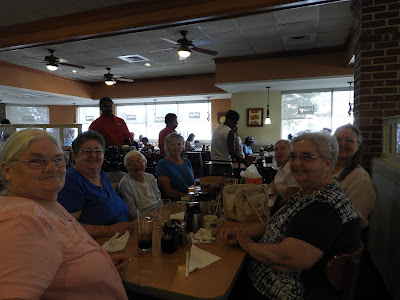 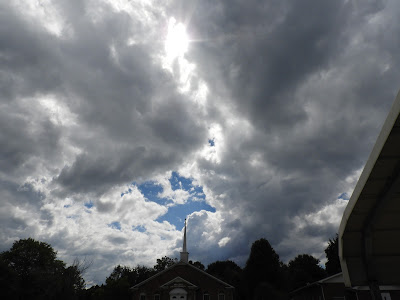 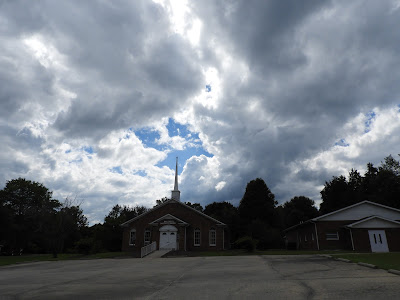 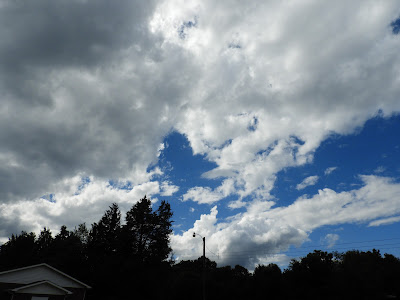 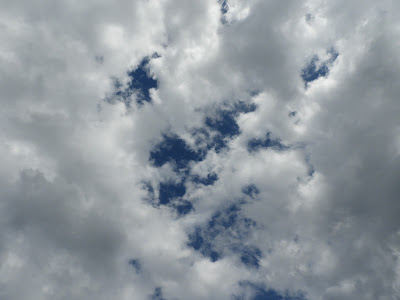 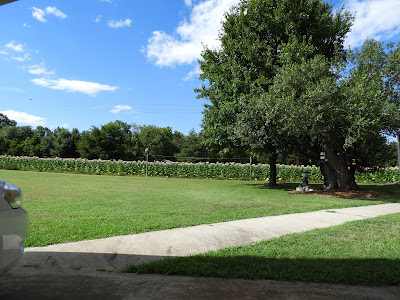 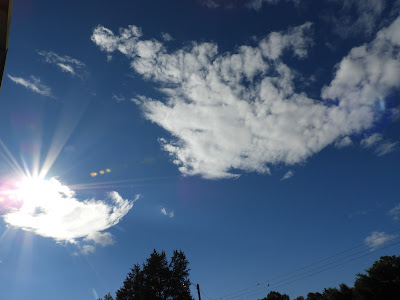 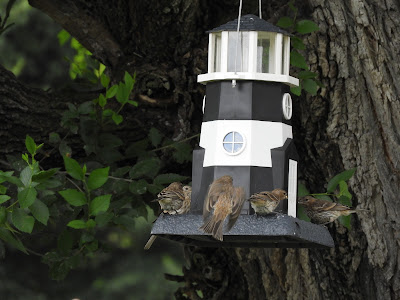 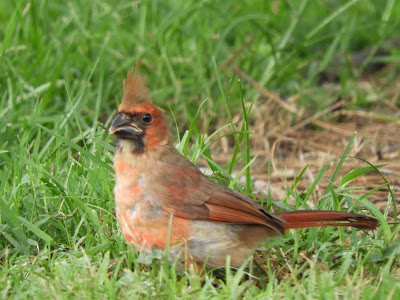 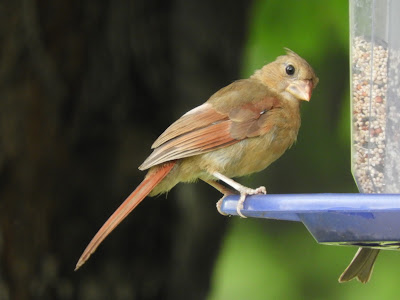 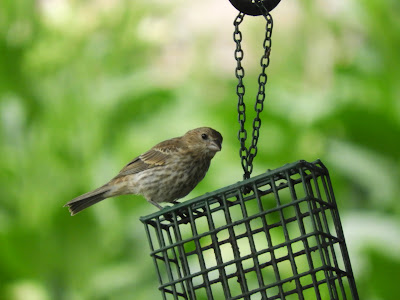 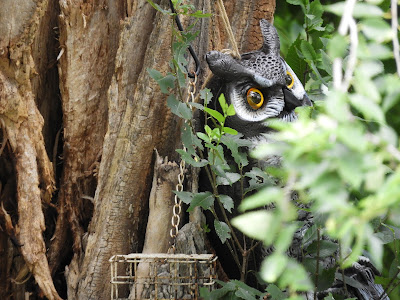 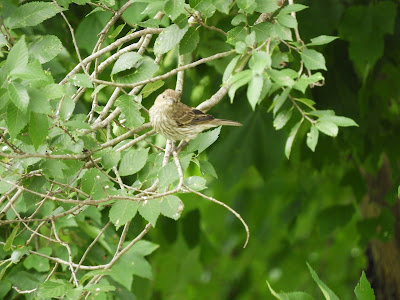 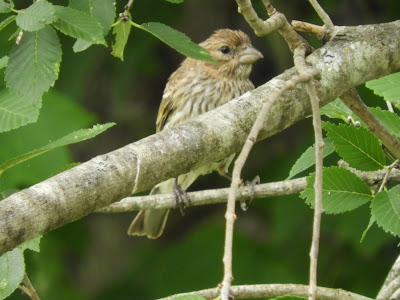 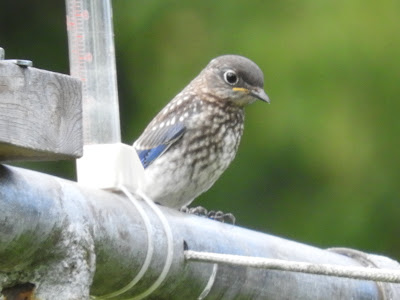 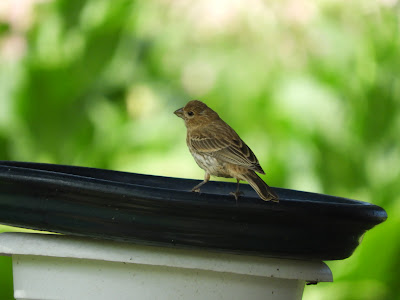 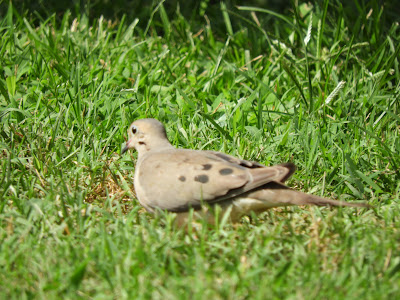 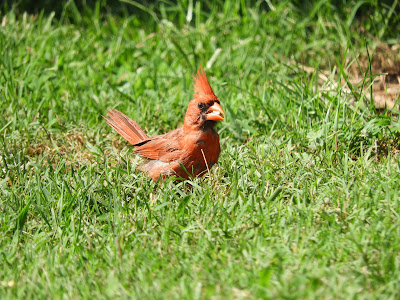 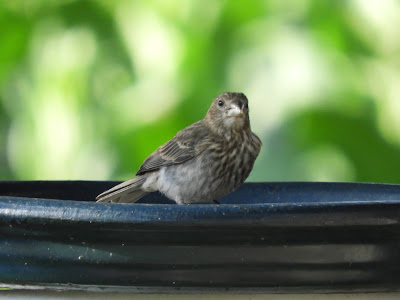 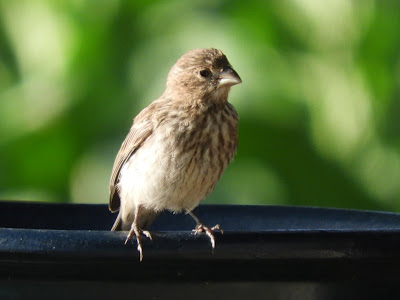 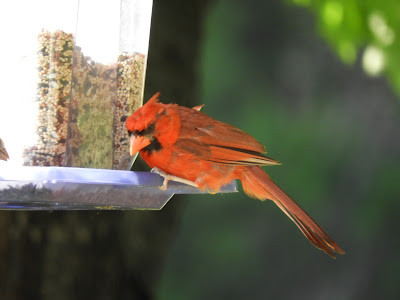 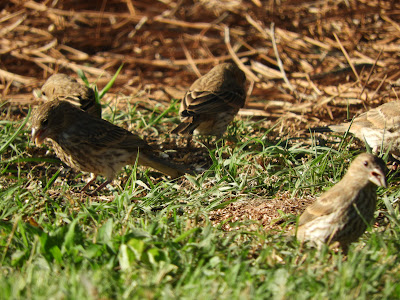 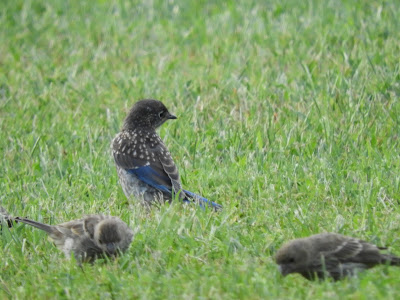 Here's to hoping Tim feels well enough to at least go to church tomorrow, but he didn't eat or drink much again today!  He was unsteady this evening.  He got up around 11 p.m. and wanted some pancakes.  Took one bite and decided they weren't very good and didn't eat any more.  He went back to bed with a heating pad against his back.  Normally his back only hurts him in the recliner, but he said it was hurting in bed tonight.
Posted by Vicky at 11:34 PM No comments: