Once again, this will be a copy and paste from what I posted on facebook today, so if you follow me there, no need to read any further except that you may have missed a few excerpts over there!  :D

Didn't like coming home to an empty house last night.
Went to bed at 9:30. Woke up at 10:30.
Slept til 3:30. Slept til 4:30. Woke up at 5:30 with a horrendous headache.
Took meds and laid back down. Back up at 6.
Kitchen cleaned up.
Fruit washed to take to hospital.
Pot of chili made to take to hospital.
Church sign ready to switch out.
Heard from my sweetie who said it was the longest night of his life.
His BP dropped to 99/47. BP is the determining factor of how many doses of IL-2 he gets. PRAY his BP holds so he can get as many doses as possible!!! The max of 14 would be great, but only 2 people have made it that far.
Time for a shower so I can get the rest of my TODO List done before going to the hospital.

I got to the hospital a little after 11 this morning. Tim looked and sounded really tired.....which he is! You know what it is like being away from your own bed at night. You know what it is like being in the hospital where they don't leave you alone. Combine both of those and you have one terrible night of sleeplessness. Plus the mattress needs more air in it but the nurses could not figure out how to do that, so they are going to switch out his bed while he is taking his shower later on. But, before he can take his shower, they need to unhook all of his tubes! Waiting patiently!

2 hours after his first dose of IL-2 yesterday at 5 p.m. Tim got the chills. About 1 1/2 hours after the 2nd dose at midnight he got a heavier dose of the chills. This morning when I got here the white blankets showing folded in the chair (8 of them) had all been on him at one point trying to get rid of the chills after the 4 a.m. dose (that was on top of the sheet, thermal blanket - the brown blanket had fallen to the floor during the night). These blankets had all been heated toasty warm, too, and it still took about 1/2 hour for the chills to subside. The nurse told him he was on the verge of the rigors (convulsive-type chills/shaking). When that happens, they will give him a small dose of morphine to help them subside. FYI - "rigors" is pronounced with a long i.

He had a good breakfast of sausage and eggs, hash browns and coffee. However, it all feels like it is "just sitting there" in his stomach, so he hasn't had a desire for lunch. I brought some fruit, so maybe he will feel like eating some of that later on. But, we were told his appetite would diminish, just didn't expect it to happen quite so quickly.

For those of you interested in the vitals, his BP right now is 98/57, which is what was registered right after I took the picture of his vitals. The bags of fluid include: potassium chloride, sodium chloride and dextrose.

More later. Thanks so much for your prayers! XOXO

My sweetie was wiped out this morning when I got there! 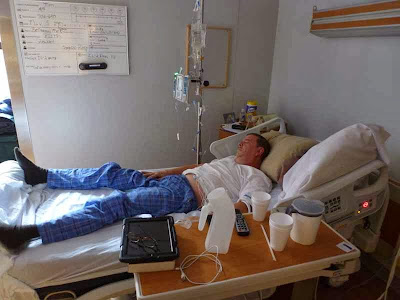 8 warmed blankets had been thrown on him to combat the chills from the 8 a.m. dose. 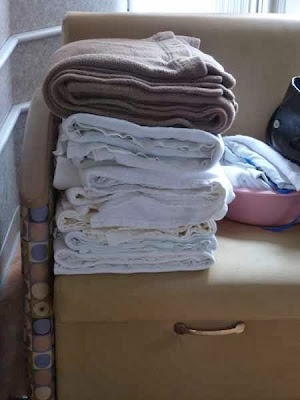 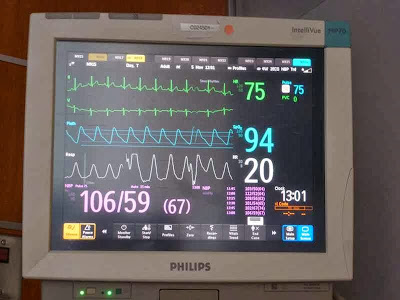 Sitting in the chair for a change of pace. 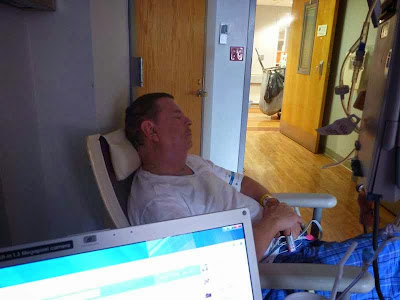 3 bags of fluids he is hooked up to at all times trying to keep his BP levels up. 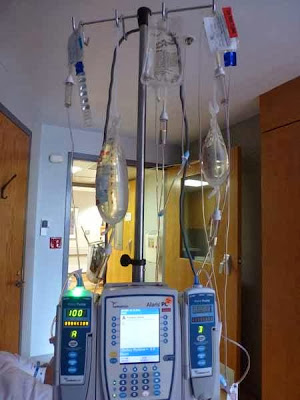 Tim was able to get unplugged from all of his "juices" and take 8 laps around the nurses station (25 laps = 1 mile) before getting a shower today. While he was taking a shower, they changed out his bed. He called it a cadillac compared to the other bed. He is sleeping at the moment, for which I am very thankful for!

He has gained 5 lbs in the last 24 hours and so we know, even though he doesn't look like it yet, that he is beginning to hold fluids. Already he is dreading the doses because of the chills it causes. So, he is trying to prepare himself by being under cover and getting warm BEFORE the shakes begin. However, it is 4:30 and the pharmacy still has not sent his 4th dose of IL-2 yet. But, I'm glad he is sleeping some, anyway.

After his shower and getting reattached to all of his fluids, they changed the dressing around his port. While they are doing that EVERYONE has to wear a facial mask, including him.

They are finally getting ready to administer another dose of IL-2 at 4:34. So, probably around 6, the shakes will begin. Pray they are not too bad!

Changing the dressing around the port involves lots of protection.  EVERYONE in the room, including Tim, wore face masks and the nurses didn't touch any part of it without gloves. 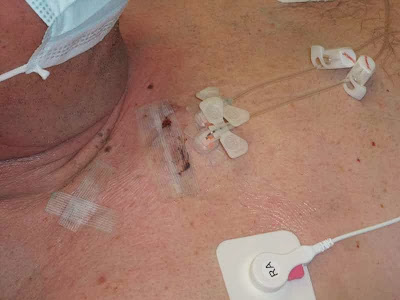 The round discs were added for protection. 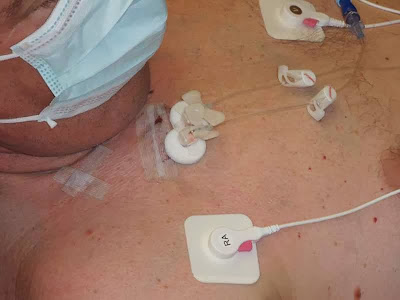 Then the whole area was covered with a clear tape. 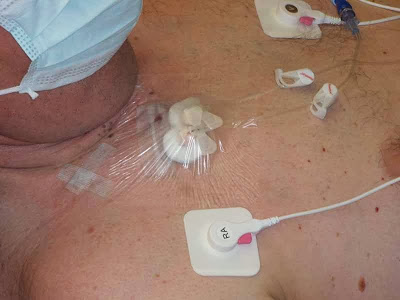 5:45 - The heated blankets have been applied! Hopefully that will nip those chills in the bud!

Talk to you tomorrow. Love you all!
Posted by Vicky at 8:52 PM