This was a conference on the theme of Hope.  Hope, as it is used in the Bible, has a different meaning than the way the word is used in today's society.  When you and I say, "I hope so and so happens," it is something we would like to happen but have no assurance that it will.  Hope in the Bible refers to a "confident expectation" in something happening.  And, as Tim brought out in his message, hope is always associated with heaven.  And even more than that, hope is in Jesus; not the place of heaven, but the person of the place, Jesus!  The messages we were able to hear were wonderful!  I hated to have to leave!  And, with the theme of the messages being focused on our eternal hope, I sensed the songs we sang as a congregation were more "spirited."  I know my heart was truly blessed and instead of just singing the songs, as I sang I paid attention to the words and found myself getting very teary-eyed at a lot of the words about our Savior and all the things I have through Him because of His dying on the cross to take away my sins.  And some of the songs I couldn't even sign for the emotion.  Thank You, LORD Jesus!

Here's a few pictures I took while there in the mountains of WV (Talcott, WV).  Don't know what will happen with the conference for next year as Bro. Stalnaker announced this was going to be his last year of hosting the conference, which he has done for I don't even know how many years.

While it was wonderful to be at the conference, there is nothing like a good night's sleep in your own bed!  It was about 12:30 a.m. when we got home.

This first one is a beautiful garden spider that Tim saw as he was picking tomatoes this morning.  Beautiful as long as it doesn't touch me, that is!  :D 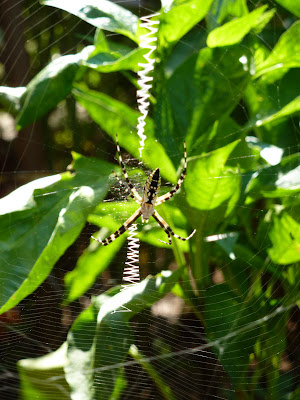 Here's the traditional picture of us standing by the Greenbrier River below the hill of the cabin we stay in when we attend the conference. 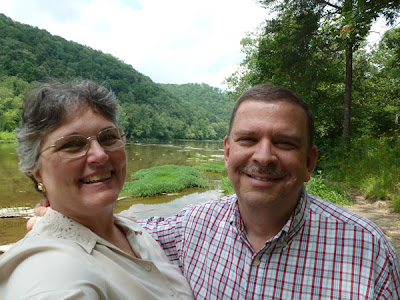 Here's an un-blocked view of the Greenbrier River.  I would love to borrow someone's flat bottom boat or canoe some year to get out on the river while here.  Trouble is, the river is usually pretty low at this time of the year. 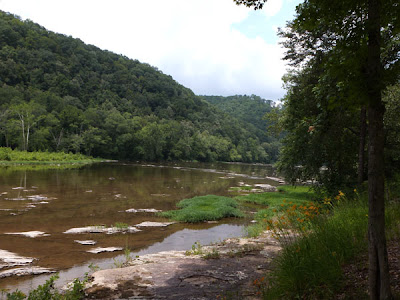 After dinner on Monday, we came back to the cabin to check the air conditioner, which wasn't working very well in our room.  It had rained and the fog was settling in as we drove back the lane to the cabin. 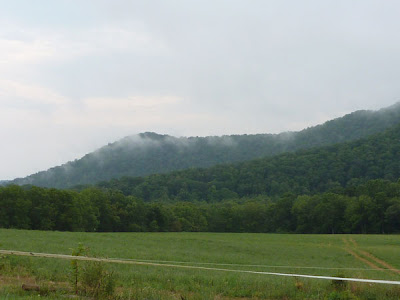 After we went back to the church, I had Tim drop me off so I could take some pictures.  This is the Greenbrier as it runs by the church.  Quite a bit deeper in this area.  You can see the fog on the hills in the distance. 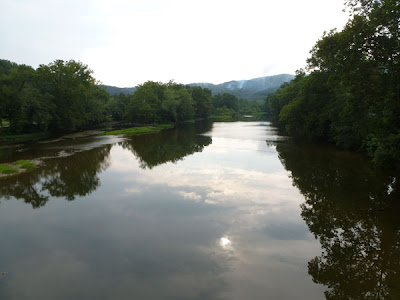 There's the canoe Tim and I need to borrow sometime! 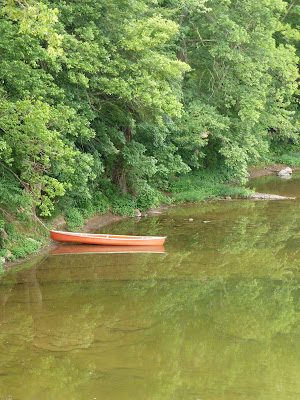 This row of fence posts with the bird houses is back the street going towards the church, which runs parallel to the Greenbrier River. 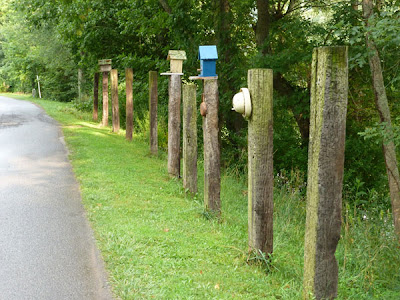 I took several pictures of the flowers around the church, but I like the way this flower looks.  Beautiful combination of colors.  What an artist our God is! 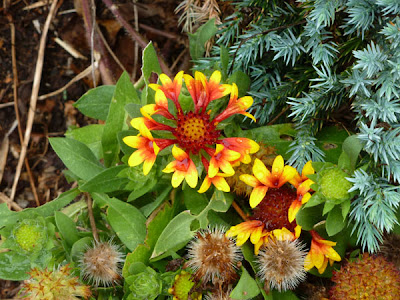 Tuesday morning, the men came early to the church for a prayer meeting at 7.  After the prayer meeting, Tim came back to the cabin to pick me up so we could go back to the church for breakfast.  The women of the church sure cook up wonderful meals for everyone during the conference!  Breakfast, lunch and dinner AND a snack in the morning and afternoon!  Let's just say you don't want to be on a diet while attending the conference!  :D  Tim was first on the schedule of preachers on Tuesday, beginning at 9:45.  Between him and the next preacher was a snack break.  Felt like we were always eating! 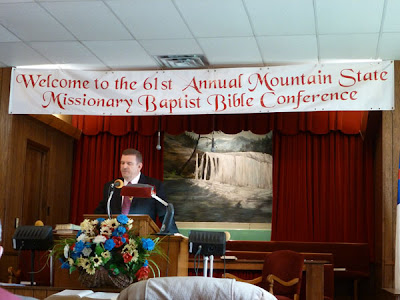 Lunch is served at 12.  After lunch is free time til dinner at 5.  We came back to the cabin so Tim could take a nap as he did not sleep well last night.  But, he couldn't sleep, so we took another walk over the hill to the river.  Coming back from the river, I got this picture of us with the cabin in the background.  It is a very nice cabin.  It is not rustic on the inside as you would imagine.  The walls are finished.  There are 3 bedrooms and a bath, living room area, kitchen/dining area and laundry nook.  Upstairs there are 2 nice sized bedrooms and a full bath.  We always sleep upstairs in the room with the bath.  Even though the shower is barely big enough for you to turn around in, we like it because it is private.  At least it has been for us so far because, generally, no one else sleeps up stairs.  The air conditioner was not working correctly in our room, however, so we had to leave the door open to the other bedroom and ours so the air from the other room could blow into ours enough to cool it a bit.  But, it was having trouble keeping up with the heat, which is one of the reasons Tim could not sleep this afternoon.  It was just too warm in the room. 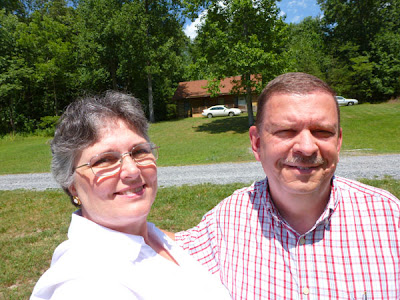 Here's a little closer shot of the cabin.  I could live out here with no problems!  :D 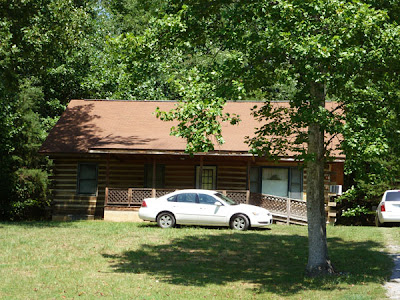